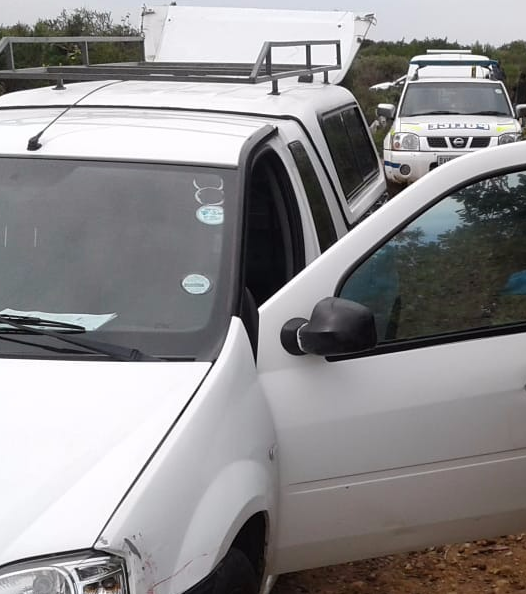 Police stand at the hijacked courier vehicle that was found back in Wells Estate on Monday morning.
Image: supplied

A courier delivery company worker was abducted while doing a routine drop off of skin care cosmetics at Pick ‘n Pay in Bluewater Bay on Monday morning.

Within 30 minutes of the hijacking, police had arrested one of the hijackers and recovered the hijacked courier bakkie – hidden in the bushes in Wells Estate.

Police spokesman Captain Andre Beetge said that the 24-year-old, who was a passenger in the courier vehicle, was abducted at about 10:30am when when they arrived at the Pick ‘n Pay car park in Hillcrest Drive to do a routine delivery.

The 28-year-old driver and passenger worked for a private contractor who is hired to deliver skin cosmetic products to various stores across the Bay.

“As the driver and passenger got out of their delivery vehicle, two men approached them. They were both held at gun point and the passenger forced back into the bakkie,” he said.

“The bakkie then sped off leaving the courier driver behind who then raised the alarm.”

Beetge said that after the men fled, the driver alerted the police.

“Police got a description of the vehicle and gave chase. A short while later the passenger was found standing in Jijana Street in Wells Estate where he waved down a passing police van,” he said.

“By 10:50am police had found the hijacked courier bakkie which was found hidden in the bushes.”

As police approached the bakkie, the four hijackers fled in different directions.

“A search for the men was done and one of the robbers caught,” Beetge said.

“The other three managed to evade arrest.”

Beetge said that 45 boxes of stock, which were due to be delivered, had been stolen.

“There was another sliver vehicle that followed the courier vehicle shortly after the hijacking. The boxes were then transferred into the following vehicle which sped off.” He said.

No one was injured in the hijacking. A case of abduction and hijacking is under investigation.