One arrested in robbery shootout 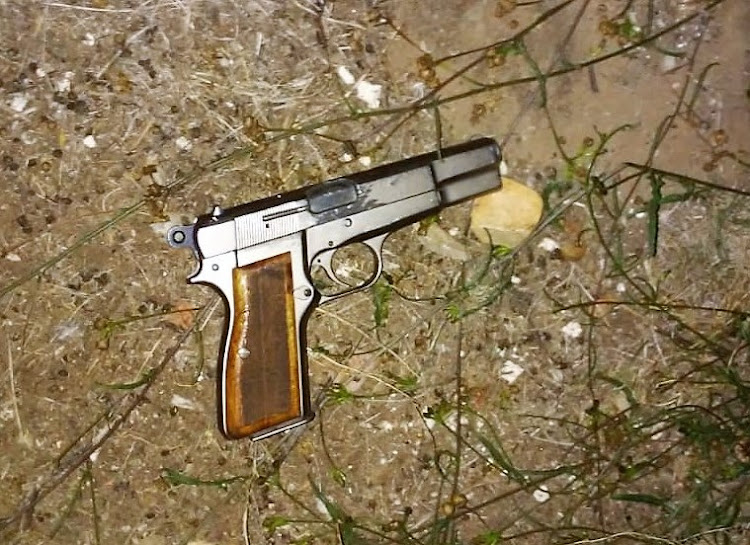 A firearm used in a shoot-out and robbery was recovered by police.
Image: Supplied

A robbery suspect was arrested after a shootout with police which left one person injured.

The arrest came moments after the pair allegedly robbed a spaza shop and fired more than 15 rounds inside the store.

While one of the suspects was caught after running away, the second gunman is still at large.

The gunmen fired several shots at police who responded to calls about a robbery at the Save More Spaza Shop in Kovu St, Zwide, at about 6:45pm on Tuesday.

“They started shooting and grabbing items from the shelves and money out of the till. During the shooting, the shop owner manager to escape unscathed however a customer, who was entering to buy cigarettes, was shot in the leg,” he said.

“The 25-year-old customer managed to run out of the shop and down the road where he flagged down a police van.”

Beetge said residents who heard the series of gunshots had already reported a robbery.

“The police were busy responding to the call for help but however were trying to narrow down where the gunshots were coming from to find the location of the store,” he said.

“At that time, the customer who was shot in the leg managed to flag them down at the corner of the street. He directed police to the robbery.”

As police arrived , both gunmen came running out.

“As the police van stopped, the suspects came running out guns blazing. Several shots were fired at police who returned fire The suspects however fled between the nearby shacks during their escape,” Beetge said.

“Police cordoned off the area and eventually found one of the suspects hiding behind a shack in Bucwa Street, about 400m from where the robbery happened.”

Police searched the man and found a loaded stolen 9mm pistol, with six rounds of ammunition, hidden in his pants.

“It looks like he tried to hide the firearm by holding it between his thighs in his pants. He was handcuffed before he had a chance to draw the firearm,” Beetge said.

Beetge said that the shop was owned by a foreign national who could not speak English.

“At this stage we are also trying to understand what exactly led to the shooting. It was definitely a robbery of sorts as cigarettes, money and cellphones were stolen,” he said.

Beetge said the man was arrested for the illegal possession of a firearm while additional charges of robbery attempted murder would be added as the probe continues.

The 24-year-old suspect is expected to appear in the Motherwell Magistrates Court on Thursday.