Defence protests as psychiatrist's report is thrown out by judge 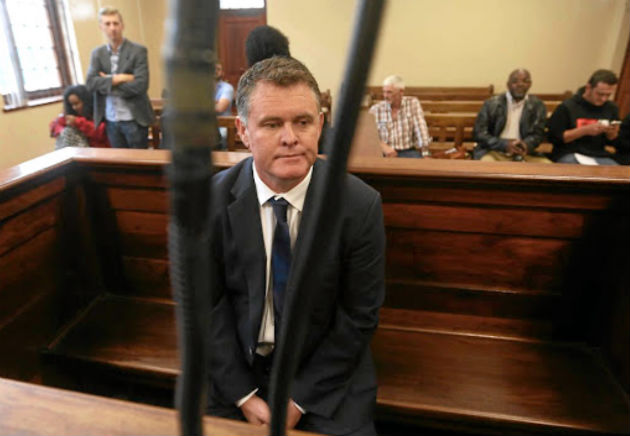 All the while Jason Rohde cheated on his wife, her name was tattooed on his body.

This emerges in a forensic psychiatrist's report that was submitted during the property mogul's murder trial this week - then thrown out by the judge.

Defence witness Dr Larissa Panieri-Peter spent Monday in the witness stand at the High Court in Cape Town, but when she returned on Tuesday, Judge Gayaat Salie-Hlophe said her 43-page report contained nothing that helped the court, and dismissed her.

In the report, compiled by the Rondebosch psychiatrist after she spent 20 hours with the Johannesburg businessman, Panieri-Peter said that on the weekend Susan Rohde died in the couple's hotel room, Jason wanted to be with his mistress, estate agent Jolene Alterskye, "in the shadows".

Jason told the psychiatrist his mistress's virtual presence in their room at the Spier wine estate in Stellenbosch was "the final trigger of his wife's despair".

The prosecution is convinced the former Lew Geffen Sotheby's International Realty CEO killed his wife at a company conference in July 2016. But Panieri-Peter painted Susan as a suicide risk.

Her report said Susan discovered a Valentine's Day card from Alterskye in Jason's suitcase in 2016 and things went downhill from there.

"The couple attended marriage counselling [13] years ago. As an act of affection, in consequence to the counselling, he had his wife's name tattooed onto his body," the report said.

"He was very attracted to the woman [Alterskye] for a period of time before commencing a relationship with her. He describes that she 'got in his head' but that he felt very guilty about their relationship. They tried to end it, but the relationship reignited shortly thereafter again."

Jason told Panieri-Peter that Susan became preoccupied with the affair and his whereabouts, and her behaviour changed drastically.

WhatsApp messages submitted to court in November told a story of Jason's passion for Alterskye and resentment of his wife.

Panieri-Peter also relied on the messages for her assessment.

The report describes how Jason became CEO of a property company without a university qualification and after starting his working life in menial jobs.

He completed a junior leaders' course during his national service in the army in 1988 and dated Susan for three years before they married in 1993.

He enrolled for a law degree at Unisa but dropped out and worked for a furniture upholstery business before joining an insurance company as a clerk.

The couple moved to Australia to join Susan's family and Jason worked there as an estate agent.

When they returned to South Africa in 1996, he started a property portfolio.

"He bought various properties and he and his wife would renovate them and sell or rent them. Mr Rohde joined Lew Geffen Sotheby's in 2005 and became CEO in 2010," the report said.

It also sheds light on his early childhood. His mother remarried when he was five, and her new husband adopted Rohde.

Rohde was in a "serious car accident" at the age of six and his maternal grandmother, "who was a very important person in his life", was severely disabled.

The judge said her report contained information the court had already been given and that some of the people whose evidence she relied on were anonymous.

Jason's counsel, Graham van der Spuy, objected and said the trial had been "contaminated" by the judge's decision.

This week, Jason's attorney, Daniel Witz, told the Sunday Times that Jason was "OK" and his focus was on his three daughters.

The trial continues on Tuesday.