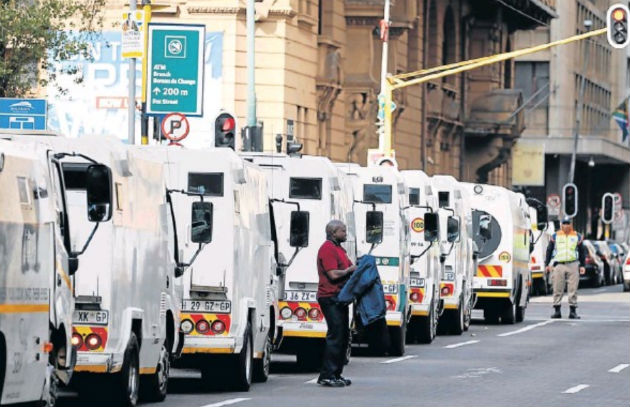 Armoured cash-in-transit vehicles joined a march by security guards in Johannesburg to hand over to the government and their bosses a memorandum demanding safer working conditions, after a spate of violent robberies across the country.

“Enough! If they don’t want to listen‚ there won’t be money in the ATMs‚” one of the marchers said, to cheers from the crowd.

Security guards marched in the major cities to voice their grievances‚ in a one-day protest organised by the Motor Transport Workers Union.

“God will not bless you with heist money‚” another read.

The memorandum in Johannesburg was addressed to the ministries of police‚ justice and transport‚ the metro police‚ the South African Reserve Bank and cashin-transit companies.

It called on police to be more visible and to react faster when cash vans were attacked.

It also demanded that police intelligence capabilities be improved and called for regulations on firearms to be amended to allow security officers to carry heavy-calibre weapons.

From the Department of Justice‚ workers demanded that criminals be dealt with harshly‚ based on credible evidence gathered by police‚ and the chances of heist suspects walking free be minimised.

They also demanded an end to the hiring of unskilled labour in the industry‚ a high standard of training and equipment‚ and more guards placed in each cash van.

Sonnyboy Mmatli‚ from the Gauteng department of community safety‚ accepted the memorandum on behalf of MEC Sizakele Nkosi-Malobane.