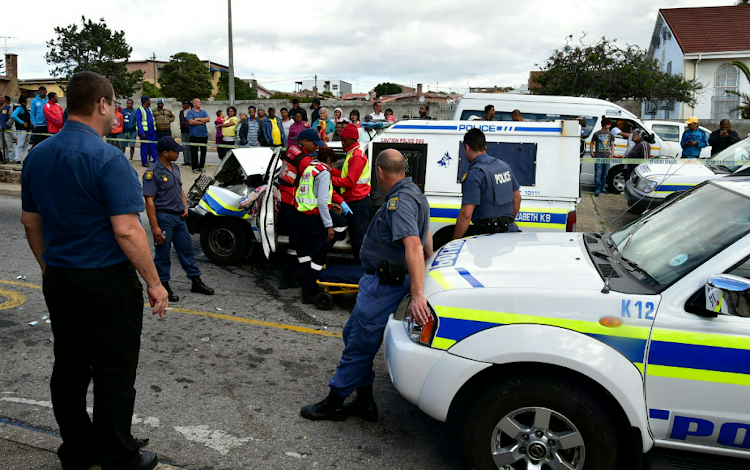 Four police officers were injured when their vehicles collided during a high speed chase after a hijacking suspect
Image: Eugene Coetzee

The hijacking of a mother outside Summerwood Primary School in Port Elizabeth on Monday morning ended in a car chase and two police vehicles in pursuit crashing into each other.

The alleged hijacker was arrested.

The brazen hijacking occurred in front of the busy school in Summerstrand at about 7.10am, while the 32-year-old mother was dropping off her young son, who is in Grade 1, at the Second Avenue entrance.

The hijacked Mini Cooper – silver with a red roof and racing stripes – was spotted in Malabar at midday, triggering a car chase.

While in pursuit, a K9 unit van rear-ended another police vehicle from the Gelvandale police station.

One of the police vans rolled in Highfield Road, Korsten, and hit a shop wall.

Four police officials were injured and were admitted to hospital.

Several roads were blocked off during the chase, with a police helicopter keeping track of the hijacked car.

The vehicle was eventually blocked by four police vans in Grant Street, Sidwell, and the 27-year-old driver, an alleged drug dealer, arrested.

Police spokeswoman Colonel Priscilla Naidu said the pupil’s mother had unlocked the doors of the car to let her son out at the school.

As she climbed out of the car, the hijacker pushed her aside and jumped in.

“He then sped off towards Strandfontein Road,” Naidu said.

“All her items were inside the car, including her cellphone.”

Police declined to name the mother and child for their safety.

“The car was spotted [in Malabar a few hours later] and several attempts to stop the vehicle failed. A number of shots were fired at the car during the chase,” Naidu said.

“Police cordoned off several streets, but the driver managed to go through all the road-blocks.

“While trying to box the Mini in in Highfield Road, two police vans collided.

“One of the vans slammed on brakes to avoid hitting another car and was rear-ended by the police vehicle behind.

“The hijacker was eventually forced to come to a halt in Grant Street, a few metres from his home.”

Naidu said two of the four injured police officials were in a serious condition in St George’s Hospital.

“We would like to warn parents to be extra vigilant when dropping their children off and to always take the keys out of the ignition and lock the doors – even if you are just walking across the road,” she said.

School principal William Foaden said he had been informed about the hijacking later in the morning.

“We are fairly alarmed by this and our management team is now looking at ways to beef up security,” he said.

“We have teachers on duty in the morning and at break times to oversee what is happening.

“The issue with the dropping off and collecting of children is that there is a constant flow of traffic, making it difficult to identify anything out of place.”

Foaden said the school would look at getting internal and external CCTV cameras, a security guard and other measures.

The hijacking suspect is due to appear in the Port Elizabeth Magistrate’s Court on Tuesday for possession of a hijacked vehicle, attempted murder and a string of other charges linked to the car chase.