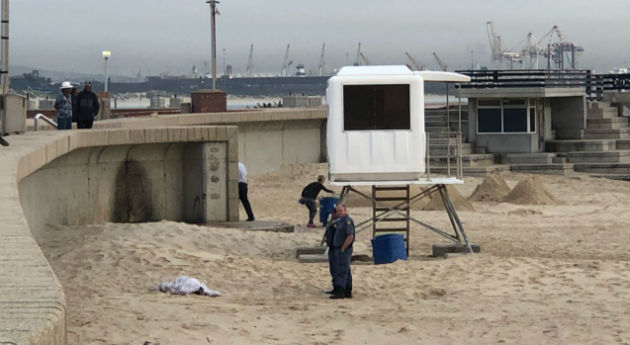 Police on the scene at Hobie Beach where a 34-year-old car guard was stabbed to death yesterday morning
Image: Supplied

Moves to implement dedicated policing for the beachfront – vital to tourism in the Bay – were revealed yesterday, just hours after a man was cold-bloodedly stabbed to death in full view of a passerby on Port Elizabeth’s popular Hobie Beach.

The victim, a 34-year-old car guard, was stabbed while sleeping near the Shark Rock Pier at about 6.30am yesterday.

The dead car guard, who had no identity documents on him and is only known by the alias “Boere”, was killed just a short distance away from the site of a robbery and stabbing incident last month.

In that case, a woman was stabbed and pepper-sprayed during an attempted mugging.

Beach walker Ron Pask, 64, who had been about 40 metres away from where the car guard was attacked, said: “He [car guard] was sleeping when I saw the other man walk up to him.

“At first, it looked like he was shaking him to wake him up but then I saw him lunging on top of him.

“I thought that he [car guard] was passed out and his friend was trying to wake him up.

“The next thing, the guy that had been asleep was on his hands and knees crawling.

“The man who I thought was trying to wake him up then just casually walked away with a knife in his hand.”

Pask said that, realising something was wrong, he ran to assist the man. “As I got closer, I saw blood on the sand. There was a woman close by who also came to assist.

“I then had to make a decision on whether to chase the attacker or help stop the bleeding.

“I saw him [assailant] standing talking to a security officer with the knife in his hand and decided to help the injured man.”

Pask said someone else on the beach must have alerted the police.

“When everyone arrived, I discovered that the security guard had just let the man [assailant] walk off.

“He was not even running, he casually strolled away with the knife still in his hand.”

M Secure (formally known as Metro Security Services) managing director Laurence Barends said the attack happened out of the security guard’s sight – underneath an extended ledge of the beachfront walkway – near the lifeguard tower.

Security guard Mzikayise Mjoli was on patrol in the ablution facilities when he spotted the alleged attacker. “The attacker was actually on his way to stab another vendor in the car park area when he [Mjoli] intervened. A discussion took place between them and the man ran off,” Barends said.

“Only after the man had fled was he [Mjoli] told that there had been a stabbing on the beach.

“By that stage, the man had already disappeared.
“The guard immediately reported the incident to the control room and the necessary emergency services were dispatched.”

He said Mjoli tried to find the suspect but he had already vanished.

Police spokesman Warrant Officer Alwin Labans said: “Both the suspect and the deceased are car guards who operate on the beachfront.

“The reason for the attack is unknown as nothing was stolen.”

He said the identity of the suspect was known and police were searching the area for him.

“We are canvassing the area and are confident that an arrest will be made soon.

“From what we understand, the suspect lives in an abandoned building in the Central area.”

In January, an elderly British couple was mugged about 500m from where the murder took place.

Last month, Jayde Frost was stabbed in an attempted mugging.

All of these incidents have galvanised moves to improve safety in the beachfront area.

Safety and Liaison MEC Weziwe Tikana had already revealed in a written reply to questions by the DA’s Bobby Stevenson last week that her office supported a Beachfront Police Sector [a specific area of a policing precinct], which would ultimately see a team of police officials dedicated solely to the beachfront.

Stevenson said yesterday: “A dedicated beachfront sector in the Humewood policing area will go a long way to improve the safety and security on the Port Elizabeth beachfront.”

Each policing precinct is divided into sectors – but the beachfront is, at present, incorporated into the Summerstrand sector.

“This [dedicated beachfront sector] is of particular importance for tourism and job creation,” he said.

“The Ward 2 councillor, Dean Biddulph, will pursue this matter at station level to ensure its implementation.

“It was at his request that I took this matter up.

“We will also continue to push for improved resources for the Humewood police station.

Stevenson said the beachfront was of strategic importance for tourism and job creation as it hosted numerous events.