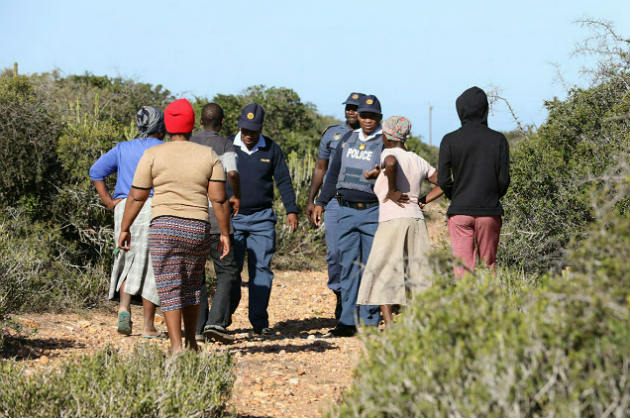 Police arrive at the murder scene in Wells Estate after being alerted about three bodies in the bush
Image: Fredlin Adriaan

A severely traumatised Wells Estate man, who was beaten to within an inch of his life by an angry mob, told yesterday of his narrow escape after witnessing the gruesome deaths of his friends by the “necklacing” method.

Mihle Myoli, 24, and Nathan Williams, 26, are the only survivors from a group of five friends who fell victim to the most extreme form of mob justice after they were accused of car theft by furious Wells Estate residents.

Williams is fighting for his life in hospital.

“They [residents] threatened to kill and torch us because they claimed Melikhaya Stamper [one of the dead men] had been stealing their cars,” Myoli said before he was placed on a stretcher in an ambulance .

“[They claimed he stole a car on Monday. They pounced on us in the house where we had been sleeping and severely assaulted us. It was scary.”

They were then forced into the bushes, where tyres were placed around their necks, doused in fuel and set alight.

Myoli and Williams managed to escape while the residents were focused on the other three.

A group of people standing at the site where the two charred bodies still lay hours later, distanced themselves from the horrific incident.

Myoli said he and the four other men had been inside the house when the mob barged in at about 10am and demanded to know where Stamper had put a bakkie they claimed he had stolen.

He said Stamper denied any knowledge of the stolen vehicle. Stamper had asked them to help push his car because the tyres were flat and was sleeping over at the house when the residents stormed in. “They then began to assault us. “I told them I had no knowledge of the car and I insisted that Stamper tell them the truth because we have done nothing wrong.

“Later, the mob forced us to the bushes, where they continued the assaults.”

Tyres were then put around the men’s necks, doused with petrol and set alight, which is when Myoli and Williams escaped.

One of the remaining men managed to crawl away and remove the burning tyre, but died at the scene from his injuries.

His body lay facedown about 50m away. He had been stripped naked and his skin – particularly at the back – had partially peeled off as result of the beating. His hair also appeared to have been burnt.

According to one of the residents at the scene, the man had pleaded repeatedly for someone to give him water as he lay dying.
However, he died before they could bring it. As news of the gruesome killings spread, residents rushed to the murder scene to see the macabre sight for themselves.

But while some people were horrified, others made callous jokes.

One woman, in reference to the charred remains, said: “Is there anyone with a knife so that I can use it to cut a piece of a biltong?”

Another one said: “How will they bury them if they are burnt beyond recognition?”

This brought the response: “I suspect plastic will be used to bury them.”

Myoli, whose legs were fractured in the beating, among other injuries, and who was clearly in agony, said he did not know how he managed to escape.

“The mob meant to set us alight but me and Williams managed to escape while the group was busy with the other three,” he said.

Myoli and Williams were found just metres away from the death site, along the N2 near Bluewater Bay where they were spotted by a police helicopter.

Ward 60 councillor Mvuzo Mbelekane condemned the actions of the residents, saying it was unacceptable.

“I understand the frustration of the people, but you can’t take the law into your own hands.

“Burning people will never be the solution.

“We need to sit down and talk. We also need a police station here,” he said.

Mbelekane said the residents were frustrated by the alleged inaction of the police after they reported the car stolen and that the tracker was activated.

He said there has been a spate of car thefts in the area recently, with most of the cars not recovered.

Police, residents and the councillor will be meeting tomorrow to discuss residents’ issues.

Three people have died in Wells Estate after they were beaten and burnt to death.
News
4 years ago