Day of insults, threats and no Trollip vote 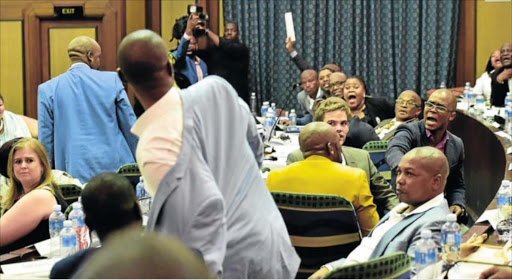 Full day of insults, threats and scuffles. This is ultimately what became of a planned motion against Nelson Mandela Bay mayor Athol Trollip yesterday as a council meeting which gripped the nation degenerated into hours of chaos.

Meant to be a buoyant show of force by the opposition, the meeting went pear-shaped within minutes as two parties which had swung into Trollip’s corner tilted the balance of power towards the coalition government.

Opposition parties the Patriotic Alliance and AIC turned at the eleventh hour after their national bosses instructed their local councillors – Marlon Daniels and Tshonono Buyeye respectively – to support the DA.

As soon as the meeting kicked off at 8am the rest of the opposition demanded that a motion to remove speaker Jonathan Lawack be debated first before the one against Trollip.

Doing so would have removed the possibility of him casting the deciding vote to keep Trollip in the event of a tie. EFF councillor Zilindile Vena said they had written to Lawack earlier, requesting him to sort out the order of the motions, saying the one against the speaker was submitted first and thus should be tabled first.

“You’ve not responded to that letter. You said you would address it in the council,” Vena shouted.

Lawack would not budge. Then came one point of order after another and screaming matches between political opponents, with the council adjourning at least five times as Lawack battled to keep the meeting under control.

The EFF, ANC, UDM and UF accused Lawack of being biased towards the DA. They repeatedly shouted him down, saying he was failing to apply the rules fairly. With the UDM’s Mongameli Bobani often screeching from the back benches, the opposition accused Lawack of not honouring agreements made between the various parties on Tuesday.

The special council meeting - which was scheduled to run from 8am to 10am and was meant to deal with all the no-confidence motions was eventually postponed for 14 days, as the councillors could not agree on the order of the motions as they appeared on the agenda, and the request for a vote via a secret ballot.

Bobani then requested a 20-minute adjournment to resolve the impasse, but Lawack refused. A shouting match ensued and eventually all opposition parties walked out.

Lawack tried to call the special sitting to order and after struggling to get it under control, he adjourned the meeting for 20 minutes and upon return adjourned the meeting indefinitely. This was then the subject of furious debate for the rest of the day, with tensions running high among the political opponents.

DA leader Mmusi Maimane was caught up in the middle of a scuffle between Vena and DA councillor Rano Kayser, who were seen pushing each other. City manager Johann Mettler and security were seen trying to break up the scuffle.

Vena explained that the scuffle was over space to get to his seat, admitting that he pushed Kayser first and the DA councillor retaliated.

At another point in the meeting, DA councillor Nqaba Bhanga was seen making threatening hand gestures, slitting a throat, which led to an uproar from the opposition. The ANC demanded he be kicked out of the chamber, with councillor Xola Sabani (ANC) saying he felt unsafe.

Eventually Bhanga apologised for the gesture.

The UF’s Mkhuseli Mtsila was involved in an altercation with the DA’s Renaldo Gouws over his dismissive hand gesture.

At about 4pm the drama calmed down and the council tackled the rest of the agenda. Three crucial agenda items were noted and approved after all councillors agreed that the meeting to deal with the motions would be held within 14 days.

The EFF abstained from the vote.

The items were the 2017-18 adjustments budget, the draft Integrated Development Plan and Budget for the 2018-19 financial year.

Approving the adjustments budget – which was last month rejected by the opposition – means that the municipality can finally:

Spend R25-million on upgrading roads for the Ironman route;

Hire more plumbers to deal with the water leaks problems; and

The draft budget and IDP were noted, giving Mettler and his team of officials the go-ahead to take it out for public participation.

Mettler said after the meeting: “Frankly I’m happy that [the adjustments budget] has been passed and the insourced security personnel can continue being employed for the rest of the financial year”.

At a news conference outside the council chamber, Maimane said the EFF and ANC were on a mission to create instability.

“It became very clear that neither the ANC nor the EFF have the numbers, otherwise why would you filibuster your own motion of no confidence?”

ANC elections head Fikile Mbalula said the ANC was not adequately doing what it was supposed to in the Bay because it was in the opposition benches for the first time in the metro.

“This is the first time that the ANC has taken a bold step to reject the position of mayorship. Under normal circumstances we would have grabbed this opportunity and gone inside and fought for numbers but we can use that position inside based on allegiances,” he said.