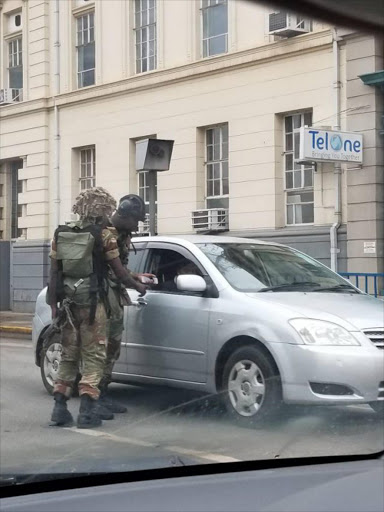 A number of Zimbabwean cabinet ministers have been arrested after the military made a show of force in the capital Harare‚ according to sources.

Loud explosions and the sound of gunfire crackling in the elite neighborhood of Borrowdale throughout the night heightened fears that a military crackdown was under way.

Several sources told TimesLIVE that the military had arrested the leading figures of the so-called G40 faction in the ruling Zanu-PF‚ led by First Lady Grace Mugabe.

The military said in a statement that President Robert Mugabe was “safe and sound”. This came after armed personnel first began moving military vehicles into Harare on Tuesday.

The state broadcaster‚ the Zimbabwe Broadcasting Corporation in Pocket Hills in Harare‚ was seized by the military at 4am.

Army spokesperson Major General Sibusiso Moyo announced that the military was now in charge for the purpose of ensuring that it dealt with the “criminals” that had surrounded Mugabe.

“We are only targeting criminals around him [Mugabe] who are committing crimes that are causing social and economic suffering in the country in order to bring them to justice‚” Moyo said.

Mugabe has in the past spoken out against any military involvement in civilian affairs and given the stern rebuke that “politics leads the gun” in an attempt to tame his army generals’ interest in political affairs.

However‚ tensions escalated after Mugabe fired his long-time ally and former deputy Emmerson Mnangagwa last week on grounds of disloyalty and a plot to take over power from him‚ triggering a pushback by the army generals.

Army commander Constantino Chiwenga this week warned that the military would “step in” to deal with the spate of purges that had gripped the ruling party‚ ordering Mugabe to reverse his expulsions.

Zanu-PF’s youth league‚ led by Kudzai Chipanga‚ on Tuesday morning dared the military and insisted that it had no place in civilian affairs.

The military then began unexplained deployments of armoured vehicles from the Inkomo barracks on the outskirts of Harare‚ which attracted public attention and sparked a social media frenzy.

In an attempt to downplay the social media attention‚ the military indicated that its deployment of the army vehicles was a routine drill and there was no cause for alarm.

A statement issued on Tuesday night at 8pm by Information Minister Simon Khaya Moyo warned that Chiwenga’s statements were “treasonous”— and was the first official response from government.

Mugabe is at his residence in Borrowdale‚ at his Blue Roof mansion‚ with his wife Grace and is under heavy military guard.

IN FULL: Statement from the Zimbabwe Defence Forces

A statement was posted from the military in the early hours of Wednesday morning on Zimbabwe Broadcasting website. Here it is‚ in full:

Fellow Zimbabweans‚ following the address we made on 13 November 2017 which we believe our main broadcaster‚ ZBC and The Herald were directed not to publicise‚ the situation in our country has moved to another level.

Firstly‚ we wish to assure the nation that His Excellency‚ The President‚ of the Republic of Zimbabwe‚ Head of State and Government and Commander in Chief of the Zimbabwe Defence Forces‚ Cde R.G Mugabe and his family are safe and sound and their security is guaranteed. We are only targeting criminals around him who are committing crimes that are causing social and economic suffering in the country in order to bring them to justice.

As soon as we have accomplished our mission we expect that the situation will return to normalcy.

To the civil servants: As you are aware‚ there is a plan by the same individuals to influence the current purging taking place in Zanu PF to the Civil service. We are against that act of injustice and we intend to protect everyone of you against it.

To the judiciary‚ the measures underway are intended to ensure that‚ as an independent arm of the state‚ you are able to exercise your independent authority without fear of being obstructed as has been the case with this group of individuals.

To our Members of Parliament: Your legislative role is of paramount importance for peace and stability in this country and it is our desire that a dispensation is created that allows you to serve your respective political constituencies according to democratic tenets.

To the generality of the people of Zimbabwe: We urge you to remain calm and limit unnecessary movement. However‚ we encourage those who are employed and those with essential business in the city to continue their normal activities as usual. Our wish is that you enjoy your rights and freedoms and that we return our country to a dispensation that allows for investment‚ development and prosperity that we all fought for and for which many of our citizens paid the supreme sacrifice.

To political parties; We urge you to discourage your members from engaging in violent behaviour.

To the youth: We call upon you to realise that the future of this country is yours. Do not be enticed with dirty coins of silver‚ be disciplined and remain committed to the ethos and values of this great nation.

To all Churches and religious organisations in Zimbabwe: We call upon you and your congregations to pray for our country and preach the gospel of love‚ peace‚ unity and development.

To both our people and the world beyond our borders: We wish to make it abundantly clear that this is not a military takeover of Government. What the Zimbabwe Defence Forces is doing is to pacify a degenerating political‚ social and economic situation in our country which if not addressed may result in violent conflict.

We call upon all the war veterans to play a positive role in ensuring peace‚ stability and unity in the country.

To members of the Defence Forces: All leave is cancelled and you are all to return to your barracks with immediate effect.

To our respected Traditional leaders: You are the custodians of our culture‚ customs‚ traditions and heritage and we request you to provide leadership and direction to your communities for the sake of unity and development in our country.

To the other Security Services: We urge you to cooperate for the good of our country. Let it be clear that we intend to address the human security threats in our country. Therefore any provocation will be met with an appropriate response.

To the media; we urge you report fairly and responsibly.