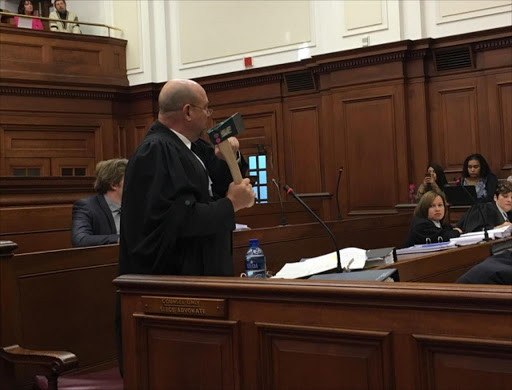 Did Rudi van Breda bleed to death in his bed after being hacked with an axe? Or did he first manage to move off the bed towards the bathroom clutching a duvet as he fought in vain for his life?

Both are ghastly to imagine‚ but the state and defence put forward very different scenarios of Rudi’s last moments before he took his last breath.

He was one of three family members killed with an axe at their luxury home in Stellenbosch in 2015 – a crime for which son and brother Henri van Breda now stands accused.

Earlier in the week‚ blood spatter expert Captain Marius Joubert said the position of the grey duvet and Rudi’s body‚ both found near the entrance to the bathroom‚ was inconsistent with details given in Henri's not-guilty plea statement.

This raised the issue of whether Henri had dragged his brother’s body off the bed towards the bathroom.

Advocate Piet Botha‚ for Van Breda‚ asked: “What benefit would my client have derived from only changing the position of one victim?”

Joubert responded that he could not say definitively but that perhaps “the person could have been angry at him and pushed him around. I don’t know.” He said he was not saying something had been “staged” but that he believed it was another person who moved Rudi’s body rather than Rudi moving there on his own.

Botha said: “The amount of blood‚ and blood flow on Rudi’s face showed a slightly raised position of his head – probably lying on a pillow - when he started bleeding. But we also know that with reference to the bigger pool of blood that was on the floor‚ that he must also have bled there for a period of time and quite profusely.”

Botha argued he was alive during this time.

But‚ Joubert disagreed: “If he was moving on his own (from the bed to the floor towards the bathroom) with his heart beating‚ then why are there no other flow patterns that show he was at some stage very active on the crime scene and moving around?”

Botha hit back‚ saying that Joubert’s theory of Rudi’s dead body being dragged around would also show such flow patterns‚ yet there weren’t any.

Joubert said the blood would have dried by then.

Botha insisted that Rudi could well have still been alive‚ and referenced his own expert‚ Dr Reggie Perumal‚ who informed Botha he “could have lived for another two hours after the attack”.

When Joubert asked on what grounds Perumal had said this since the amount of blood on the bed was so significant‚ Botha retorted: “You are the witness - you answer the questions‚ you don’t ask them!”

Botha then got into heated debate with state prosecutor Susan Galloway on the line of questioning‚ and Joubert stood hisground‚ repeating‚ “looking at the crime scene and the flow pattern on his (Rudi’s) head‚ I cannot concur with the statements made by Dr Perumal as they are inconsistent with the blood stains observed.”

The case has been adjourned to Monday.