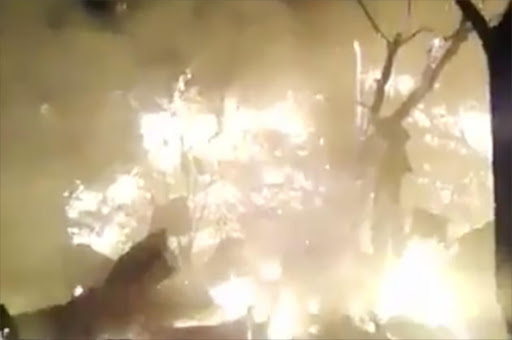 Hundreds of people are counting the cost of a fire which swept through the Kennedy Road informal settlement in Durban on Sunday night.

The blaze‚ fuelled by strong winds‚ raged for several hours and razed as many as 200 informal dwellings.

A fire at the Kennedy Road informal settlement razed as many as 200 shacks. 🎥: Hassan Haniff 🔥

Ward councillor Hassan Haniff said he had rushed to the scene after the fire was reported in the early evening. "As this stage the damage is devastating. I was at the scene last night and I estimated that 200 dwellings had been destroyed."

Haniff said he had heard reports a baby had been rushed to King Dinizulu Hospital with burns. There were no reports of fatalities.

"There was quite a strong wind that made the fire spread very quickly and that made things worse." Hassan said that firefighters had battled the blaze for several hours before bringing it under control.

"I am going back to the scene this morning to do a more accurate estimate of how many homes were destroyed and how many people have been displaced‚" Haniff said.