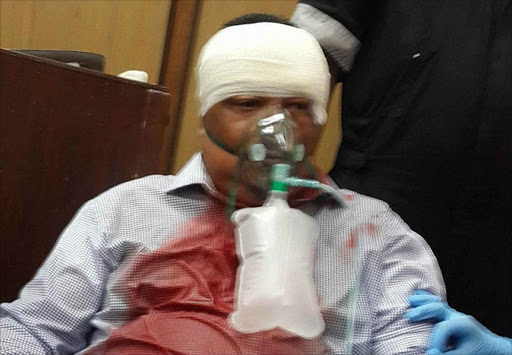 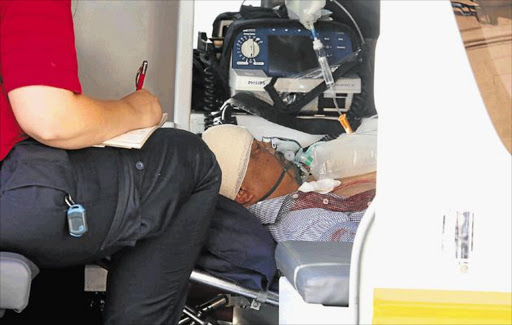 Assault caught on video but both DA, ANC lay complaints

Damning cellphone footage in the hands of police shows ANC councillor Andile Lungisa smashing a glass water jug on a DA councillor’s head during a heated brawl which degenerated into unprecedented violence in the Nelson Mandela Bay council this week. The footage shows Lungisa and ANC councillor Makhi Feni near the speaker’s bench in an argument with DA councillor Rano Kayser. Kayser’s back is to the camera, with Lungisa and Feni facing him. After a few seconds, Lungisa raises his hand and smashes a glass water jug over Kayser’s head. Shards of glass explode over all their heads as Kayser falls face forward onto the ground. DA councillor Andy Jordan is seen hitting Lungisa with a flagpole. Lungisa then runs out of view of the camera and to the right side of the council chamber. A gunshot then goes off, with police claiming a security guard pulled the trigger.

The violence erupted when the council decided that the conduct of ANC Ward 16 councillor Xola Sabani would be probed after Sabani allegedly started a public municipal meeting, meant to be led by Nelson Mandela Bay mayor Athol Trollip and his executive, an hour before the scheduled start time. During the fracas, Trollip is seen ducking as a glass flies over his head. This footage was handed to police – who called it “damning” and “overwhelming” – on Thursday night. Police sources have confirmed viewing the footage and that a suspect would soon be arrested for assault with the intention to do grievous bodily harm. Police insiders said they had not yet arrested Lungisa as conflicting versions, of events from the DA and ANC had to be ironed out. Detectives obtained a statement from Kayser yesterday. Kayser, who heads the roads and transport portfolio, said he had been discharged from hospital late on Thursday night.

He said an artery in his head had been damaged by the glass as the jug was smashed against him with huge force. “I received stitches and treatment for multiple wounds on my body because of the glass. “They’ve damaged an artery. I must be back in hospital [today],” Kayser said. “Those two councillors [Feni and Lungisa] went up to the speaker. I realised the speaker might be in danger. I went to talk to them because I was the closest. “I spoke to Lungisa but he prevented me [getting] to the speaker because Feni’s hand was already on the hands of the speaker, as if he grabbed the speaker. “Something distracted me but when I looked back, I saw Lungisa lifting this jug of water. “At close range, he hit me at full power. “I looked in his eyes. I did not expect that he would hit me. He lifted the jug and I saw it coming and then just felt a huge bang.” Kayser collapsed and lost consciousness for a few minutes. “I just realised the seriousness of my injury when I became conscious and saw that some of my colleagues tried to stop the bleeding, because it was flowing like water from a tap.” Kayser said he had opened a case against Lungisa and the authorities would have to decide how to categorise it. Lungisa has also opened a case against Kayser. In stark contrast to Kayser’s statement, Feni said Kayser was the one who had launched the attack. “I was assaulted and in that chaos I could not see because my glasses fell. I picked them up and ran away,” Feni said. Asked if he had seen Lungisa assaulting Kayser, he said: “Well, people defend themselves differently, some with fists. I don’t recall how I defended myself but in that chaos I ran away.

The DA councillors attacked us, but people don’t care about us. “I am at the doctor now because I collapsed this morning,” he said. On Thursday Lungisa also said it was Kayser who had started the brawl. Asked to respond to Lungisa and Feni’s version of events, that Lungisa had merely been defending himself, Kayser said: “Defending himself against what? I was only talking to him. There are sufficient witnesses. “I was getting up to talk to them, to say ‘let’s rather go back to our seats’.” He said he had not heard the gunshot as he had still been unconscious. Police spokeswoman Captain Sandra Janse van Rensburg declined to elaborate on details of the case but confirmed that a security official’s firearm had been confiscated and cellphone footage handed over to police. “I can confirm several cases are under investigation, the most serious of which is assault GBH,” she said.

Cases include assault common, intimidation and the discharging of a firearm. Asked if Lungisa would be arrested, Janse van Rensburg declined to comment. Police on the scene said members of both the DA and ANC had laid criminal complaints against each other after the fracas. The ANC’s national leadership yesterday strongly condemned the violence in the council meeting, saying it had no place in a democracy. National spokesman Zizi Kodwa said no amount of “blame game” would ever explain or condone the bloodshed in the council chamber. “People who were elected democratically must persuade and win each other [over] through debates,” Kodwa said. At a press conference at its regional offices yesterday ANC caucus leader Bicks Ndoni also condemned the violence, saying: “We cannot be seen as promoting violence, therefore we condemn the use of violence as a means to resolve violence.” Insisting that a DA councillor, not a security officer, had fired shots, Lungisa said: “You cannot carry guns in a council chamber. “We are being assaulted and it will be very hard to go back there as we are traumatised.” – Additional reporting by Siyamtanda Capa and Avuyile Mngxitama-Diko