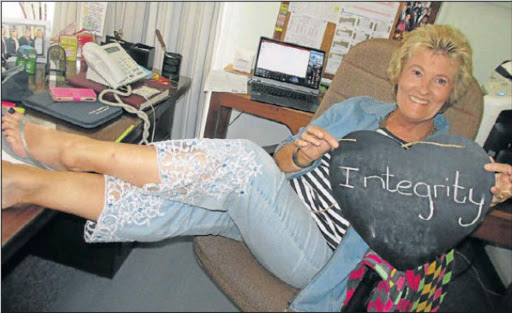 Marilyn Woods to retire after an almost 60-year involvement with the Uitenhage school Considering she walked into its corridors on her first day of school almost 60 years ago, it is safe to say that a prestigious Uitenhage institution has been a lifelong commitment for Marilyn Dodd Woods. Her name has become synonymous with the school but, after 45 years in the teaching profession, the Riebeek College Girls’ High principal is handing over the baton and retiring at the end of the year. “Everyone asks me whether I am counting the days until retirement, but honestly I am not. “I feel so privileged to still be in love with teaching and the profession. I am happy to be going on pension still with so much passion for the job,” Woods said. “It is hard – there is nothing easy about it. You have to manage people as well as work with children. But I am still happy about coming to work every day.” Woods said she was proud to be associated with Riebeek, which had a solid reputation and had been progressive when it came to transformation. “Education has changed and the government has changed, but we were actually one of the first schools to open our doors to other races in 1990,” she said. “I remember we were very proactive at the time and today there are predominantly Xhosa and coloured girls attending Riebeek." “However, while nothing really has changed at the school, adaptations have been exhilarating.” Woods said about 700 girls attended the school, which offered Grades 4 to 12. “I think the reason behind our proud history and reputation is our work ethos,” she said. “We are a happy school and this is due to a phenomenally good staff. “Our staff turnover is not high and there are people who have been here for 20 or more years. “I believe a low staff turnover is a sign of a good school.” She said besides herself, many past pupils also returned as teachers to the school. “At one stage, there were about 10 of us.” Born and raised in Uitenhage, Woods will have to bid farewell to buildings she has become familiar with since starting her schooling career in what was then Sub A – now Grade 1 – in 1957. “I was in Std 3 [Grade 5] when my eldest sister went to train as a teacher at the Grahamstown Training College,” she said. “I remember thinking that I would be going there as well to start my training. I always knew that I wanted to be a teacher.” After Woods matriculated in 1968, she studied in Grahamstown and returned to Riebeek to start her teaching career at its primary school in 1972. She married her childhood sweetheart, Russel Woods, who attended Riebeek’s brother school, Muir College. “We met when I was in Std 7 [Grade 9] so he was definitely my childhood sweetheart,” she said. The couple have two sons, Gareth, 32, and Darren, 31. Russel died after a heart attack in June 2012. Woods plans to move to Port Elizabeth after living in Uitenhage all her life. “My sisters are in PE and so is Russel’s family and Gareth,” she said. “Darren lives in Uitenhage, but mightmove to PE as well. “I am looking for a townhouse but it has been hard – there needs to be an emotional connection." “I am looking forward to settling in PE and exploring more. Not just to travel, but to explore more avenues in life. “I want to continue my work at the SPCA and do other volunteer work and take a mosaics class and build puzzles.” So great is her love for puzzles that the school surprised Woods with a 500-piece jigsaw with old school pictures of her made into a collage, at a special assembly last Friday. “It was really special, because they did this guard of honour and I had to walk through the middle. “The head girls from the past five years were also there – and Zoleka Mtila from the Class of 2010 and a contestant in The Voice SA performed a song." “I loved it because they included the children and it was all song and dance. There was nothing formal or pompous about it.” Woods said one of her favourite songs, All You Need is Love by the Beatles, was played before she was escorted to a tea with all the prefects. While a new head would still be named, she was confident the school would be in good hands. “There is a great staff here who all work hard, so it will be a good start for any principal,” she said.