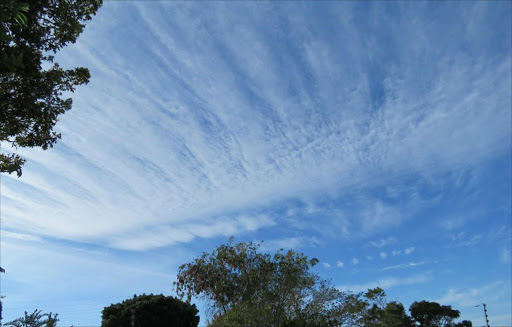 Chemtrail watchers have raised the alarm about a flurry of strange new “chemical spray trails” criss-crossing the sky above Nelson Mandela Bay and elsewhere in the country. Port Elizabeth resident Diane du Preez, 44, said she had grown up in Port Elizabeth and had never seen the distinctively long thin cloud formations before. “Now I’m seeing them all the time in all kinds of weather cold or hot, windy or not. And it’s not just me – other people are also talking about it.” A glance at the Chemtrail Watch SA Facebook group testifies to this wider consternation. People from Malmsbury in the Western Cape to Ugie in the northeastern Cape described and posted pictures of these formations, ascribing them to “serious spraying” of toxic chemicals. Mossel Bay resident Sarah Kalell correct told The Herald the suggestion from weather service experts that they were simply benign jet condensation trails or contrails was misguided. “With the jet fuel efficiency these days and the dryness of the air way up there contrails are rare and they dissipate quickly. We are seeing these formations all the time and they hang around for hours.” She said a recent test of the water in her rainwater tank had shown it was polluted with aluminium and this threw further light on the chemtrails and the possibility of rogue “geoengineering”. “The aluminium couldn’t have come from the ground. This is rainwater, so the pollution must be in the air. Somebody is spraying aluminium fibres into the atmosphere.” Kalell said she could not at this stage prove who was behind the spraying or why it was being done. “Whether there’s a military link or whether it’s to do with gambling on stock exchange weather derivatives or some other reason is not yet clear. “But what we believe is it’s aimed at weather modification and at the same time it’s making people sick with all kinds of respiratory problems. It need’s urgent investigation.” The concerns are echoed globally on the California-based group geoengineering.orgwhere group spokesman Dan Wigington demands: “How expansive and blatant does the climate engineering elephant in the sky need to be before society wakes up? “Unfortunately most of society no longer recognises natural cloud cover from a sprayed toxic aerosol sky. Our atmosphere has been completely altered by the constant toxic jet spraying assault. We are living under a canopy of contamination that is decimating the biosphere and all life.” Du Preez said one of the concerns raised by South African chemtrail watchers was that the government’s controversial rain-seeding programme had been relaunched and that the residue from this programme was condensing in the atmosphere to form chemtrails. South African Weather Services (Saws) climate information unit manager Elsa de Jager said the rain-seeding programme was run in the eastern Orange Free State in the late 90s. Planes sprayed silver iodide beneath existing cumulus clouds and as this chemical was taken up it enhanced the formation of droplets and improved the chances of rain. The technology was so successful the Saws pilots were invited to deploy it in the Middle East but at the same time it had to be halted at home because it was so expensive, she said. A similar cloud manipulation programme was later devised and deployed in Mpumalanga, this time to reduce the chances of hail storm damage to tobacco crops. But Saws has not deployed the programme since, De Jager said. “I don’t believe this programme is involved in these ‘chemtrails’ that are being described by your readers. “What is being seen is probably contrails.” Contrails are produced when jets pass through moisture-laden atmosphere, she explained. “The physically aircraft disturb the atmosphere and it cools down, condensing into ice crystals, so the normally invisible water vapour becomes visible. “At the same time the water vapour condenses around the impurities being pushed out the aircraft engines. Both these processes leave a visible ‘contrail’.” The contrail typically forms quickly not far behind the plane but then lingers long after it has disappeared, she said. “They spread out over the sky until they hit a drier zone at which point they evaporate.” Saws Port Elizabeth spokesman Garth Sampson said he had seen several of the strange clouds described but said they were all contrails. “I saw a beautiful one myself the other morning. They’re vapour trails from aircraft, nothing more. If there are more of them being spotted it’s probably related to the increase in air traffic.”