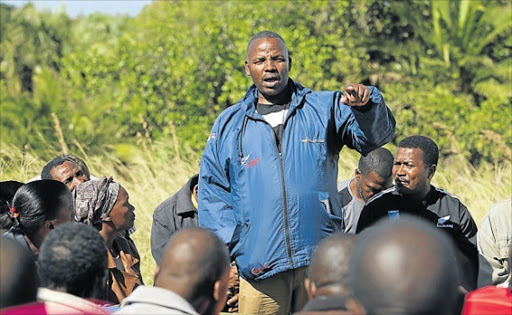 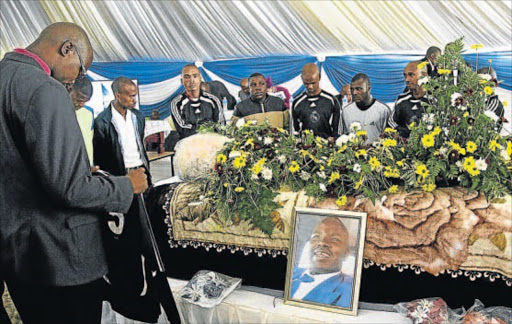 [caption id="attachment_140734" align="aligncenter" width="569"] IN THE LINE OF FIRE: Anti-mining activist Sikhosipi ‘Bazooka’ Radebe, who was gunned down last month, speaks during a meeting in May last year with Xolobeni community members who oppose mining of dunes in the area. Picture: ROGAN WARD[/caption]

WITH the northern Wild Coast still simmering since the murder of prominent anti-mining activist Sikhosiphi “Bazooka” Radebe, an NGO has written to the Australian government calling for an urgent inquiry into the activities of Perth-based Mineral Commodities (MRC).

The Hawks said on Thursday there was still no arrest for the killing, which saw Radebe gunned down by two men posing as policemen outside his house in Lurholweni in the Xolobeni area on March 22.

Hawks spokesman Brigadier Hangwane Mulaudzi said the case was receiving serious attention. A multi-task team, including police from various units – and headed by the Hawks – was on the ground in the Xolobeni area investigating the murder.

The Hawks had got involved as the killing “seems to have been organised”, Mulaudzi said. Calling for calm amid “escalating tensions” in the Xolobeni area, Mineral Resources Minister Mosebenzi Zwane noted that the Xolobeni mining right application accepted by the department a year ago was still pending in terms of being granted approval or not.

At present, “the applicant is still conducting consultations”. MRC executive chairman Mark Caruso told Weekend Post this week, however, the company had pulled back on its assessment programme because of “ongoing intimidation and . . . rather than inflame the situation.

So at present the programme is on hold,” he said. He said the company had launched an internal inquiry into Radebe’s death, but had turned up no new information.

He said MRC did not condone violence and, contrary to allegations, most recently by AmaMpondo royal spokesman Chief Mandilize Cinani at Radebe’s funeral, “the company is in no way implicated in this incident”.

In the letter to the Australian High Commission, however, Sustaining the Wild Coast (SWC) spokesman Sandy Heather said the slaying of Radebe “comes in the wake of over a decade of intimidation, harassment and disregard for human rights and basic democratic processes by MRC.

“We strongly believe this murder was the result of Radebe’s leadership of the Amadiba Crisis Committee, and the organisation’s strong anti-mining stance.

“We call on the Australian government to urgently initiate an inquiry into MRC in South Africa,” Heather added.

The papers argue that mining will “have profound negative impacts upon the objectors’ livelihoods, ways of life, environment and land rights in exchange for limited benefits to a few.

“This impact cannot be justified without their agreement, and as they have not and will not agree to mining, the mining right application must be rejected.”

[caption id="attachment_140735" align="alignright" width="300"] FINAL FAREWELL: Members of a local soccer team put a jersey on Sikhosiphi ‘Bazooka’ Radebe's coffin during the funeral at his home in Mdatya Village in Xolobeni last weekend.[/caption]

Caruso said in his e-mail to Weekend Post that the company’s forecast was that the site in Xolobeni’s coastal secondary dunes would produce some 450 000 tons of zircon, rutile and ilimenite, generating about R3-billion a year over 25 years and creating about 600 full-time jobs.

He said just 10% of the community were against the mining. But in its focus on the Xolobeni mining application, the Eastern Cape government’s November 2014 Integrated Wild Coast Development Programme Diagnostic Report said “surrounding communities are unanimous in their opposition to the mine, as it would require moving communities away from the area, destroying their livelihoods in the process, and potentially causing irreparable damage to the surrounding environment and curtailing any hopes of developing a viable ecotourism industry over the medium to long t e rm .

“Allegations of collusion and even corruption have led to a heightening of tensions in the area , ” the report noted.

“Rising stakes in the already heated debate point to serious concerns that state mining interests and policies have been captured by vested commercial and political interests, without due consideration to the development interests of the people living in the region,” it added.

Last Saturday, two years after the publication of this report, speaking at Radebe’s funeral in Mdatya, Chief Cinani said he blamed the government and co-option of government policy by business for the killing.

In footage viewed by Weekend Post, Cinani said: “It is not about the Guptas. We see now there are Australians bringing huge sums of money. “The government gave permits to the Australians while the people were saying no.

Bazooka has died with the key in his hands. There will be no mining here.”

Community spokeswoman Nonhle Mbuthuma told Weekend Post this week, “the community will not be forced into submission by this murder”.

Asked if the murder could have been related rather to taxi conflict as Radebe was also a taxi boss, she said she knew of no taxi conflict in the area.

Social worker and theologian John Clarke, who has worked with Wild Coast communities for the past decade, said solidarity meetings had been scheduled in the wake of Radebe’s murder.

The aim was to ensure his death was a turning point, he said, “to not only put a stop to further ambitions to mine the Wild Coast, but also to force government to face up to its constitutional responsibilities with regard to ensuring human rights trump mining rights”.