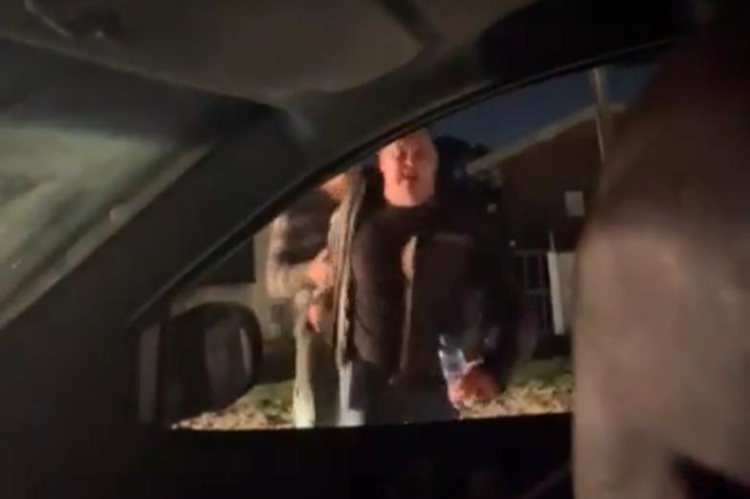 MAIN SUSPECT: The footage shows a heavyset man, dressed in a leather jacket, swearing at the three occupants in the red Chevrolet Utility
Image: SUPPLIED

The motorbike club fraternity in the Eastern Cape has distanced itself from an assault on a Gqeberha woman at the weekend — allegedly by bikers.

The assault, soon after an accident involving the woman and another biker, was caught on video and has since gone viral.

In the disturbing video filmed with her cellphone, Zintle Msindwana can be heard sobbing while a heavyset man dressed in a leather jacket uses derogatory language as he approaches her vehicle.

Speaking in Afrikaans, he can be heard warning the woman to “take the f**king phone away”.

When she refuses, he says: “You want to die?”

The phone is seemingly knocked out of her hands and what follows sounds like someone being hit.

In Behind The Herald Headlines with Daron Mann this week, we speak to Msindwana’s boyfriend, Tandizulu Tati, who arrived on the scene shortly after the accident and updates us on her progress.

We also speak to two members of the motorbike “brotherhood”, Charl Johnson of the Eastern Cape Bikers’ Association and the Christian Motorcycle Association’s Pastor Ziggy.

WARNING: The video below contains violence and profanity

The Eastern Cape biking fraternity has launched a manhunt for a group of bikers who put a woman in hospital by beating and kicking her while allegedly using racial slurs.

The Eastern Cape biking fraternity has launched a manhunt for a group of bikers who put a woman in hospital by beating and kicking her while ...
News
1 month ago

An accident between a woman motorist and a biker on Saturday night turned into an act of savage barbarity as the woman was dragged from her car and ...
News
1 month ago

WATCH | Woman in hospital after clash with bikers in Gqeberha

A Gqeberha woman is in hospital after she was allegedly beaten up by a group of bikers after an accident on Saturday night.
News
1 month ago