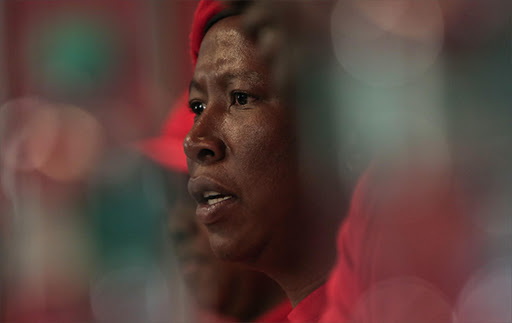 Speaking at an EFF press briefing in Braamfontein‚ Johannesburg‚ Malema said the state was in a crisis.

"The centre is no longer holding … things are falling apart … The truth is that we are now on our own‚" he said.

Malema accused Finance Minister Malusi Gigaba of being a central figure in the political saga.

"Gigaba is personally responsible for the collapse of state-owned entities.

"He is the architect of state capture and therefore cannot be trusted with public funds.

"When he gives guarantees that the Public Investment Corporation is safe‚ it is like asking us to trust a rat when it says your cheese is safe with me.

"Gigaba has already demonstrated this by extending the term of Dudu Myeni as board chairperson of SAA‚ despite demonstrated incompetence‚" Malema said.

Malema also accused Gigaba of running a parallel administration within Treasury in order to bypass strict adherence to the Public Finance Management Act.