This inflatable electric scooter fits inside a backpack 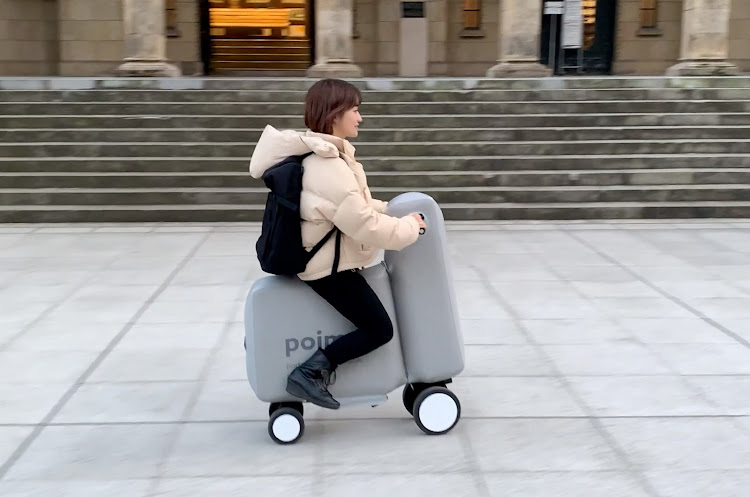 Micro mobility: the Poimo is ideal for short city hops and deflates into a backpack-sized package. Picture: SUPPLIED

In the quest for the ultimate compact city commuter, a team at Tokyo University has come up with an inflatable scooter that fits inside a backpack.

Called Poimo (portable and inflatable mobility), the portable electric scooter takes up minimum space when being stored or transported, but turns into a city runabout when inflated with a standard floor pump.

Developed in conjunction with research company Mercari R4D, the e-bike is a clever micro-mobility solution that could serve as last-kilometre transport for city-dwelling commuters, or even as an alternative to taking the train, bus or taxi for short hops.

It’s an alternative to electric scooters, which are becoming popular in large and congested cities.

The Poimo’s inflatable body sections are made of sturdy thermoplastic polyurethane — the same material used for air beds — to which the rider attaches the rigid components (front and rear wheels, battery, electric motor, handlebars, and wireless controller) in a process that takes just a few minutes.

It runs for about one hour per charge.

The whole set-up weighs about 5.5kg which makes it light and portable enough to carry around in a backpack. The prototype has a top speed of 6km/h, and being soft and deformable the scooter is less likely to injure pedestrians in an accident.

The designers have unveiled a custom-fit version that would be made for each user, based on photos that they provide.

“About 60% of car trips in Japan are short distances, which is not very good in terms of congestion and greenhouse gases. This is a similar situation in other countries,” said a spokesperson for the design team.

“We believe that new mobility like Poimo is needed to replace this with short-range-only personal mobility.”

The Poimo is still in the development phase and it’s not known when it might reach the market or what it might cost.