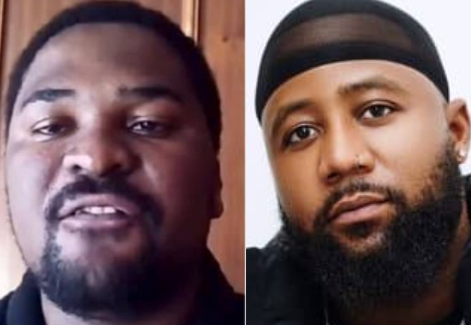 Cassper Nyovest, right, seemed a bit reluctant to have a rematch with Slik Talk, left, after the rapper won the boxing match that lasted 12 minutes.
Image: Twitter

It seems Slik Talk did not have enough of those punches when they went toe-to-toe in December and wants another opportunity in the ring.

Who can forget how Cassper Nyovest gave controversial YouTuber Slik Talk a beating in a very brief bout that made Cassper a champ.

Cassper shared a WhatsApp message between him and Slik on his Twitter timeline on Tuesday revealing that the vlogger was ready for another boxing showdown with him.

The Summerlove hit maker knocked the YouTuber out in just under 12 minutes in December 2021 and soon started talking smack against Cassper.

Not SLIK TALK wanting to get his ass whooped again. pic.twitter.com/HFAYWKdXPd

During one of his episodes he lambasted Cassper for choosing different commentators instead of Podcast and Chill hosts for the Celeb City boxing match.

“They gave you the clout and besides, this is not the first time MacG and Sol have spoken about you but you still invited Sol to be a commentator because you needed the clout. How dare you replace Sol as the commentator when he did such an amazing job commentating on the fight,” Slik Talk said.

In reply to that Cassper said he no longer got aggrieved by Slik Talk making comments about him.

In an interview with Robert Marawa on VumaFM, Cassper responded to the controversial YouTuber, saying he was no longer offended by his comments because he understood he was merely doing it for attention and didn't mind that he gained from it.

“He's got a lot of energy. What's weird is that he did not have that energy on the night when I was standing across the ring. He was begging me. After I beat up Slik Talk, for me he just became a comedian because after meeting him and interacting with him, I realised he's not who plays on the internet. He's actually a very soft child, a good child. He came with his mom.” he said.