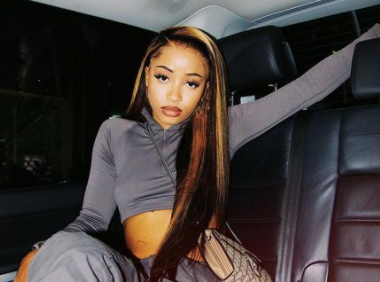 Tweeps in Mzansi are now more than a little convinced that Canadian-born rapper Drake might just have his eye on amapiano DJ Uncle Waffles. This after he tagged Uncle Waffles on his Instagram story recently after the star's performance in Tanzania.

Drake has been following the popular DJ and has been making appearances on the DJ’s Instagram Live, and tagging her on his Instagram stories.

He reposted a clip from Uncle Waffles’ stories on his own Instagram account which was considered a co-sign in the music world. "Co-sign" is a form of endorsement on social media, especially when bigger and more established artist shows love to an upcoming star -  another informal way of giving a shout-out or stamp of approval.

Music exec Nota Baloyi gave Waffles props for being a rising star, and said she had “serious potential”.

“Uncle Waffles did everything Nasty C wished he could’ve but he was too busy being a Drake wannabe instead of being original. She’s adapted well to the pressure and it seems her management team are determined to prove me wrong about them. I sincerely hope they do. Serious potential,” he tweeted.

Uncle Waffles did everything Nasty C wished he could’ve but he was too busy being a Drake wannabe instead of being original. She’s adapted well to the pressure & it seems her management team are determined to prove me wrong about them. I sincerely hope they do. Serious potential!

Meanwhile, Waffles is also enjoying the attention from the Canadian rapper.

Waffles recently announced on Instagram that she was releasing her first EP Red Dragon and subsequently dropped her first single Tanzania.

Her debut album Red Dragon recently became the most streamed project on Apple Music in the country.

“This moment still feels very surreal for me and I’m just so grateful for what my life has become in the past six months,” she wrote on Twitter.

Drake just mentioned me on his story

This is not the first time Uncle Waffles has been on Drake's radar. Last year he followed the DJ when she was still new to the scene.

The screenshots of Drake's exchange on Waffles' Instagram Live circulated on Twitter, and the rapper had social media abuzz with his continued interest in the latest DJ to rock Mzansi.

Here are some of the reactions below:

i hope uncle waffles doesn't fumble drake , cause it's clear he's into her 😩.

At this point, Drake should come to SA and talk to Uncle Waffles, It's clear he really likes her.