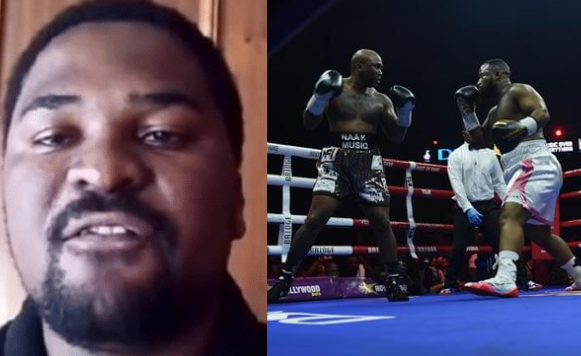 Controversial YouTuber Slik Talk anticipates a rematch between Cassper Nyovest and NaakMusiQ while he celebrates the rapper's defeat.

NaakMusiQ was crowned champion after two judges scored in his favour in the Celeb City exhibition fight at Sun City on Sunday.

Slik Talk, who lost to the rapper in their boxing match in December 2021, was elated by the turnout and took to his YouTube channel to say Cassper had finally met an equal opponent.

“You found an opponent who was prepared and ready and he completely humbled. You just got your arse whipped because you were too arrogant. You were posting your training, you took it lightly. You had one boxing match and you took this one lightly . Naak completely humbled you. I definitely want to see a rematch,.” he said.

Like many, Slik Talk said he initially was convinced NaakMusiQ would not win but was impressed with how he shutd own people's claims.

In a recent interview with Robert Marawa on VumaFM, Cassper said he was no longer offended by the YouTuber's comments because he understood he was merely doing it for attention and didn't mind that he gained from it.

“He's got a lot of energy. What's weird is that he did not have that energy on the night when I was standing across the ring. He was begging me. After I beat up Slik Talk, for me he just became a comedian because after meeting him and interacting with him, I realised he's not who he plays on the internet. He's actually a very soft child, a good child. He came with his mom,” he said.

When Cassper and NaakMusiQ entered the ring in Sun City, most of the crowd were cheering for the man dubbed 'Mufasa'. This was Capper's second celebrity boxing match and he appeared to have the upper hand.

But NaakMusiQ turned out to be a strong contender, beating Cassper.

“There's very few things I remember from being in the ring. I was really tired. Cassper was punching. All I knew is don't fall,” he told journalists after the fight.

NaakMusiQ said he had hoped for a knockout but was glad the match made it to full time.