Blow by Blow: Here’s how the Cassper vs NaakMusiQ celebrity boxing match went down 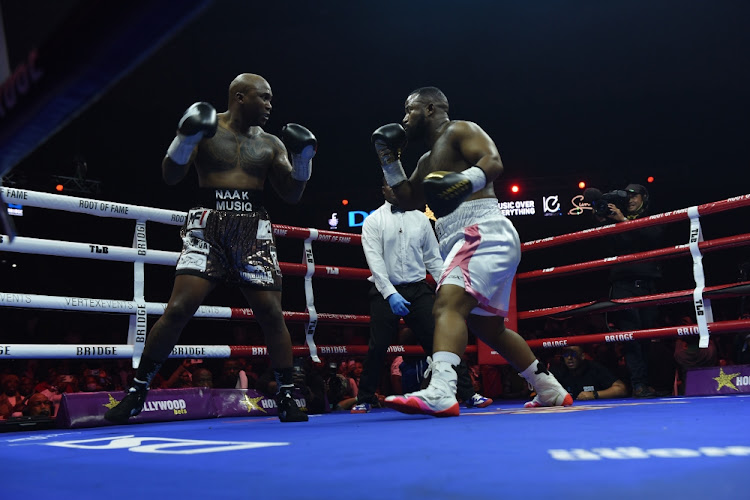 NaakMusiQ and Cassper Nyovest square off in the ring at the #CelebCity boxing match.
Image: ST Sibiya

Celeb City's exhibition fight between actor and musician NaakMusiQ and rapper Cassper Nyovest at Sun City on Saturday caused a social media frenzy as the outcome was not what most had expected.

While normal professional bouts are limited to a maximum of 12 rounds, with each round lasting three minutes in men’s boxing, the two stars fought five rounds with NaakMusiQ being crowned champion after two judges scored in his favour and the other in Cassper's.

Fans witnessed a lot of ducking punches and clinching from both stars.

The rules for their bout had NaakMusiQ and Cassper using 16-ounce gloves, which chairperson of Boxing SA's sanctioning committee Sakhiwe Sodo told TshisaLIVE during a press conference ahead of the event was deliberate to ensure they did not get hurt.

“We wanted them to be tired, so they didn't hurt themselves” Sodo jokingly said.

“They wanted to use 10-ounce gloves but we stuck to our governance rules preferred for this.”

The 16-ounce gloves are usually used for sparring because their large size can help shield the boxer's head or body when guarding.

Sodo said the prime focus was to ensure the safety of both men and maintain the core values of the sport.

“We developed a framework of rules. It is just around the celebrity tournament understanding that these are people who have not been thoroughly trained in boxing [use that kind of equipment].

Contrary to what some might believe, the fight was played fair and regulated by the SA National Boxing Organisation, which provided their ring officials to judge the fight.