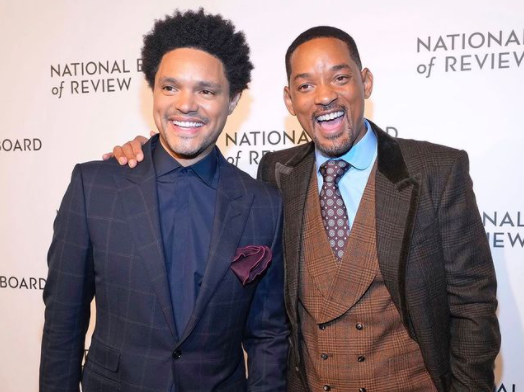 Critics slammed comedian Trevor Noah for his moment with Will Smith after the Oscars.
Image: Instagram/ Trevor Noah via Getty Images Entertainment

Tweeps are lambasting SA comedian Trevor Noah for a moment he shared with Will Smith after his debacle at the Academy Awards.

Social media is split with opposing opinions since actor Will slapped comedian Chris Rock for making a joke about Jada Pinkett Smith while presenting the Oscar for documentary feature at the 94th Academy Awards ceremony.

Trevor, who was in the audience when it happened, said he was surprised to find out the incident was not scripted.

After the incident, TMZ shared a video of Trevor and Will embracing each other while engaging in a long conversation at the Vanity Fair after party before taking photos together.

Tweeps were not impressed with Trevor and accused him of choosing sides by addressing Will in private while he publicly spoke about the "KimYe" drama in an episode of The Daily Show, when he compared the saga to the abuse his mother endured.

“Trevor Noah @Trevornoah — I hope you feel like a fraud today. You go after @kanyewest for his violent and abusive behaviour, then a week later suck up to Will Smith after he slaps Chris Rock on TV. Maybe Chris Rock crossed a line, but you promote violence!” one Twitter user wrote.

You won’t miss me, but I’m done watching you. Will Smith was wrong. Party with him all you like, enjoy your wealth, but the rest of us will continue to follow the law and are paying attention to boundaries. I’m finished with hypocrisy, apparently you’re not.

“But Jada has alopecia, it was poor taste”

Kanye has bipolar but he was fair game for Trevor Noah and friends. pic.twitter.com/XzF1LnE549

Isn’t Kanye uninvited to the Grammys, just because they’re afraid he might do something violent? But Will Smith actually got out of his seat and smacked someone and people applaud him. #BlackTwitter #Oscars #willsmithchrisrock #ChrisRock @Trevornoah #WillSmithAssault #Oscars2022 pic.twitter.com/BwJDTSpBAM

Before I end the day,

Trevor Noah @Trevornoah - I hope you feel like a fraud today. You go after @kanyewest for his violent and abusive behavior, then a week later suck up to Will Smith after he slaps Chris Rock on TV.