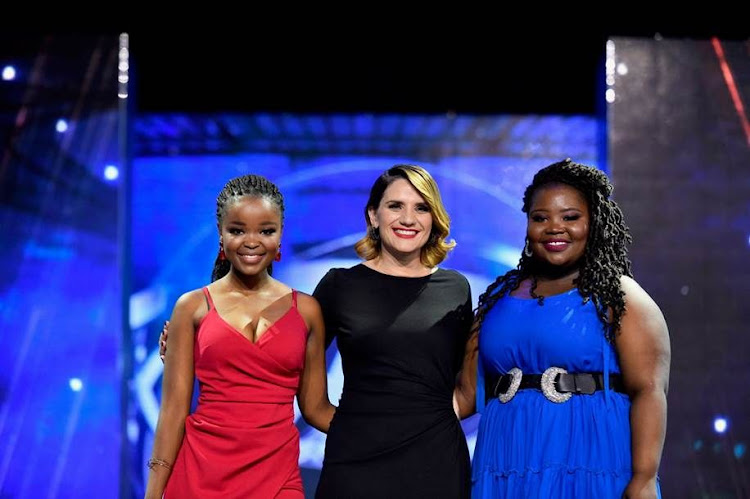 HOME STRAIGHT: This Sunday's episode of Idols SA will be an all-women affair as S'22kile, left, Berry and Karabo go head to head
Image: SUPPLIED

Sunday’s Idols SA semifinal will bring Mzansi a show they have never seen before with a first all-female top three.

This after Karabo, Berry and S’22Kile outsang the best of Mzansi’s talent to make it to this crucial stage.

Also for the first time, two of the top three contestants are returnees to the Idols SA stage, with Berry and Karabo — who previously didn’t make it past the open auditions stage — having tried and failed to reach the live shows in the past.

Sadly, it was the end of the road for the last man standing, Kevin, who failed to gather enough of the eight million votes cast over the week to make it to the top three.

For the show’s diehard pro-women fans, this season’s winner will most definitely be a woman.

Performing three songs each, the women tried to show viewers that not only do they have the talent, but also the star power to convince the country that either one of them could be the 17th winner of Idols SA.

Each of the contestants had their moment to shine, with Karabo wowing the viewers during her first performance, in which she shared the stage with gospel great Lebo Sekgobela, singing Hallelujah Mdumiseni.

S’22Kile got rave reviews for not only her hunger to stay in the competition and the resulting hard work she had put in, but also her song choices.

Randall commended her decision to sing Amanda Black’s Mina Nawe for the cover song segment and Unathi was pleased she had decided to sing Doja Cat’s Woman.

But as far as Unathi was concerned, Berry had stolen the show.

She was blown away by Berry’s isiZulu during her duet with gospel singer and pastor Ayanda Ntanza.

Randall said their performance of Ayanda’s hit Basuka was a great start to the show and he also commended her song choice for the trending hit segment — Adele’s Easy on Me.

Berry, Karabo and S’22Kile will spend the next week in Cape Town recording their first singles with Kalawa Jazmee Records.

The Idols SA semifinal will air on Mzansi Magic, DStv channel 161, from 5pm on Sunday.