‘Not a paid post. I believe in the EFF’ — Ntando Duma makes her stance clear 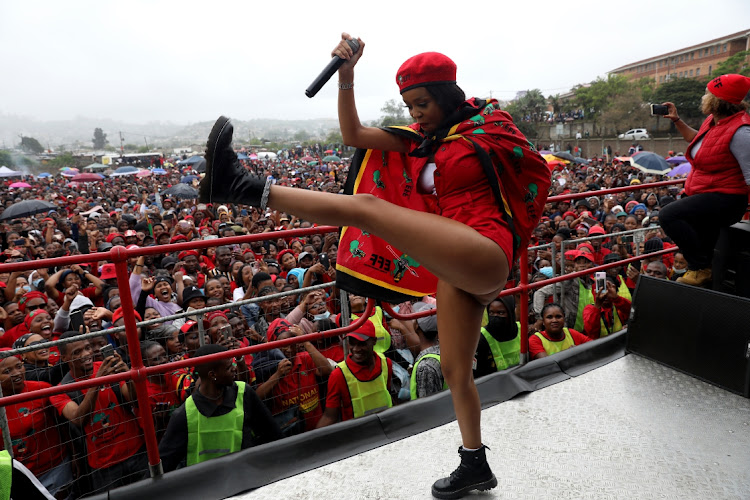 After campaigning for weeks with EFF leader Julius Malema and the rest of the squad, actress Ntando Duma has reflected on the journey and expressed her hope that people have heard what they EFF has to offer — an ideal she has made clear she believes in.

Despite having been met with negative feedback from some of her fans after making her political colours clear, Ntando has stuck by her guns by proudly showing her support for the EFF.

In preparation for the local government elections on November 1, Ntando travelled from province to province as one of the people chosen to help the EFF win votes.

Taking to her Instagram on the day South Africans cast their votes, Ntando penned a heartfelt letter detailing what it meant to her to be part of the EFF team.

“When we said we are running the country, we did not lie! We literally travelled from province to province, city to city and township to township. We ran the country, chief! We did it with so much devotion and endearment in hopes for restoration of the black child’s dignity.

“Fearless once said : 'Who uses art not only to benefit themselves and uplift their families but to educate and liberate the oppressed masses of our people.' We are so proud to have done this with so much passion and fearlessness. Now we hope for the people to have heard our cries and voices and do the right thing and vote for the EFF.”

The actress made it clear her reflection post was not one she was paid for. She said it was inspired by her belief that the political party deserves a chance to fulfil the promises they've made to people all over Mzansi.

“We hope for a better way of living and better opportunities for our black people moving forward. Our land and jobs manje! Not a paid post ke le bahlali, I believe in the EFF,” she wrote.

Watch Ntando's highlight reel from her time campaigning with EFF below:

Just like Ntando, other media personalities including Criselda Kananda and Thami Dish have made it clear where their loyalties lies.

Criselda has never shied away from letting her political colours show. Earlier this year, the media personality made it clear that no matter the challenges ANC may face, she will always rally behind it.

This after she got tons of backlash for campaigning for the political party.

“If you knew me, you would know the ANC is my political home. It may be infiltrated by thugs but that doesn’t change the fact that it is my political home. You appreciating my active citizenry doesn’t take away from the fact that I contribute of myself because of the ANC’s teachings. The ones who steal, I don’t know who influenced their behaviour. Definitely not the ideals of the ANC,” she said.

Taking to her Instagram on Monday, Criselda made it clear she made her “X” next to an ANC's candidate name.

“My home — my future. Voting is my obligation. My vote is no secret,” she captioned a snap of ANC hot air balloons.