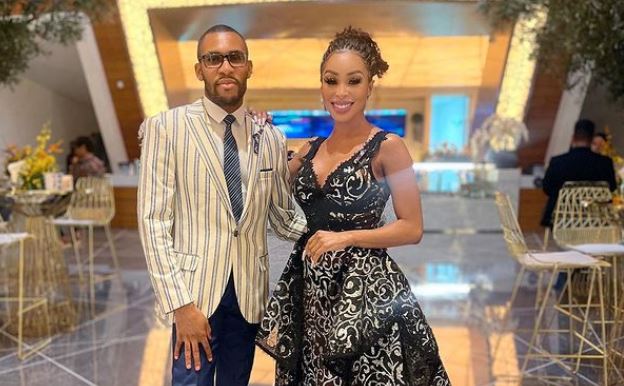 Fans wish that Kudzai would hurry up and ask Khanyi Mbau to marry him.
Image: Instagram/Khanyi Mbau

Happiness Ever After star Khanyi Mbau has sparked engagement rumours after she took to her Instagram account to share a picture of her with bling on her ring finger.

Despite the drama that has emanated from her relationship with Zimbabwean businessman Kudzai Mushonga — however entertaining it was — Khanyi's fans still hope to hear happy news of either a bun in the oven or a ring on her finger.

This was made clear over the weekend when fans ran with the speculation that Khanyi may be engaged after she posted a picture wearing a sparkling ring on her ring finger on her left hand.

Khanyi neither insinuated nor explicitly said or wrote anything related to getting married in the post. In fact, she was mocking the load-shedding situation in SA in her caption — as she has been since she left for Dubai for the second time.

The ring may very well have been just an accessory for her outfit in that particular picture but that didn't stop fans from filling her comment section with congratulatory messages on her “engagement” or asking her to confirm what the rock on her finger symbolises.

Here's the snap below:

While it may not be an engagement ring, Khanyi's fans didn't forget that Kudzai spent some time in a Cartier store when he was waiting for her to return from the saloon (read: from SA) earlier this year.

The actress was welcomed back in Dubai with roses and jewellery and a ride in a fancy Maybach V Class.

This after the pair's relationship hogged headlines when Khanyi abruptly left Dubai during their vacation and landed in SA without Kudzai's knowledge. This led to Kudzai thinking Khanyi had gone missing and the whole thing played out on Instagram as Mzansi watched.

Anywho, Khanyi has ignored the suggestion from the internet that she's Kudzai's fiancée. Even though she often calls herself “Mrs K” — the nickname given to her by Kudzai who has said multiple times that Khanyi is his wife.

The pair were rumoured to be on their way to the altar before they packed up their lives in SA and headed for Dubai. Khanyi has also had to shut down pregnancy rumours.