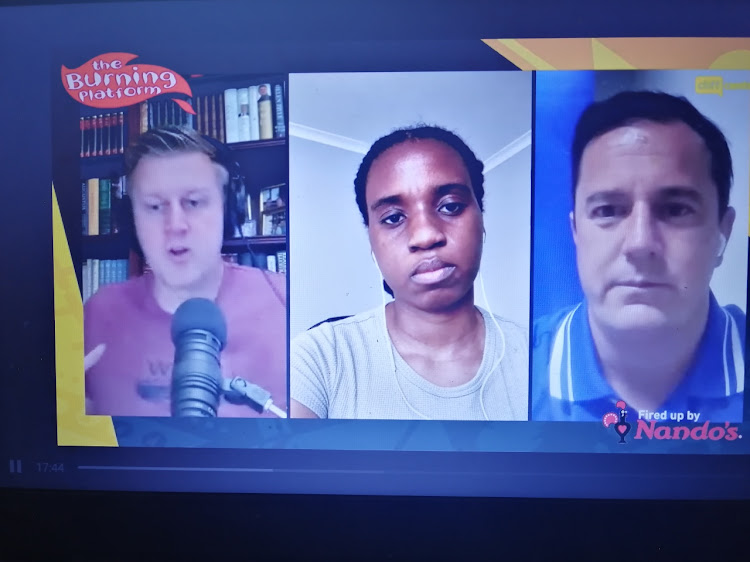 Gareth Cliff, Mudzuli Rakhivhane and John Steenhuisen on The Burning Platform on Thursday.
Image: Screenshot from the video

DA leader John Steenhuisen and media personality Gareth Cliff continue to be at the receiving end of criticism after their conversation on racism went viral at the weekend.

Cliff had Steenhuisen and One SA Movement spokesperson Mudzuli Rakhivhane as guests on his The Burning Platform, where they discussed politics and the upcoming local government elections on November 1.

Here's a timeline of what happened:

Sharing a clip of the debate on social media, Rakhivhane expressed her disappointment at Cliff and Steenhuisen, accusing them of trying to talk over her and telling her that her experiences as a black woman in SA do not matter.

In the clip, Cliff starts off by saying there were hundreds of thousands of people who were worried about where their next meal would come from in comparison to “about five people worried about the hideous racism”.

Rakhivhane interjected in an attempt to share her lived experiences with racism to which Cliff responded: “Your personal experiences are completely anecdotal and unimportant to all of us.”

He continued: “I am not interested in identity politics. No-one really is.”

Rakhivhane had asked Steenhuisen about race-baiting and the controversial DA posters erected in Phoenix last month.

After the clip went viral, fast-food chain Nando's announced it was conducting a probe into the matter. It said while it promotes free speech, it does not promote invalidating people's lived experiences with racism.

We do not, and will never, invalidate anyone’s experiences or condone racism in any form. We are taking this serious matter under review. [2/2]

A day later Nando's announced its decision to part ways with Cliff. The company said Cliff failed to facilitate a healthy debate with Rakhivhane by talking over her and dismissing her concerns.

“This is highly disappointing to Nando's and at odds with the reasons we originally entered into our sponsorship of 'The Burning Platform' more than five years ago. We have made this known to Gareth Cliff and the Cliff Central team and have urged them to address this with their audiences as a matter of priority,” said Nando's in a statement.