Here's why adults need swings and beach buckets too 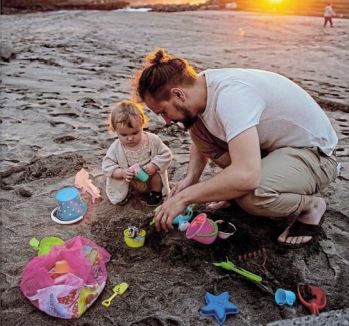 A toddler watches closely while playing on the beach with her dad. There must always be roommfor people to let loose and have fun, says the writer.
Image: CANVA

In the novel The Fault in Our Stars, heroine Hazel experiences a deep nostalgia for the childhood freedom and comfort symbolised by her disused swing set languishing in the backyard.

Several years ago, I wrote about the benefits of swinging (the actual action of swaying to and fro on a seat suspended by ropes or chains — not the dark-horse trend among some couples in suburbia).

Since I’m busy reading my daughter’s high school setwork, and it features a beautiful, emotional plot twist involving a swing, I’m moved to consider the benefits of swinging again.

I thought about a couple of Montreal designers who had created a “musical swing” for adults at a city bus stop.

Big people behaving like little kids — it was pure delight.

Probably the most obvious benefit of having kids is being able to use them as an excuse to play.

When you strip away all the boring stuff, like finances, homework and not being able to wee on your own, you’ll realise that little people rescue you from the pit of despair that is modern adulthood.

Having spent several years pushing pint-sized toddlers on swings in parks, at nursery schools and in other people’s back gardens, and watching them tumble and climb all over slides, beams and sandpits, I’ve often wondered why we allow jungle gyms and swings to fade so quickly into memory; and what life might be like if more of us were tumbling, climbing and swinging into adulthood.

Once, when my kids were small, I tossed them into the garden because it was hot and I felt like being a progressive parent.

I spent a few minutes setting up the correct developmental play goodies in shady spots — one for the primary schooler (big, bold, mildly dangerous) and another for the toddler (safe, plastic, impossible to break).

I sat under a tree and off they went.

For two minutes, until the toddler wanted interaction and mothering.

So I stood next to the sandpit and made digging motions.

He whined some. I squatted (getting harder to do this — have you noticed that?) and told him to build a tower.

He whined lots and patted the grass next to the sandpit.

I hate sand on my bum and in my Kelso slip-ons.

But I hate whining crescendo even more, so I sat.

It dawned on me, like some prehistoric, subconscious Freudian daydream, that he had expected me to put sand in a bucket.

The point of those neon spades and thingies is to keep the under-age user occupied while you do important, grown-up things that you can’t do otherwise, such as read and count the calories in an avocado without getting the numbers mixed up.

The toddler wasn’t interested in avocados and he didn’t give a schnauzer about life metaphor novellas.

He just wanted to put sand in a bucket with someone.

Like a pint-sized yogi, my son had the spiritual sense to know that if you’re going to do something, do it well and with passion.

Also, it might as well be putting sand in a bucket, which has no real point in the “real” world — but when you turn the bucket upside down, out pops a tower that you can smash (if you’re a boy) or decorate with shells (if you’re me, or a girl — or both).

Kids are supremely wise. Of all the dumb or delightful things I did that year, building four towers — not breaking a single one — and covering them with petals from the Christmas roses was the highlight.

And it makes me wonder why we don’t swing any more, or play with sand?

I Googled “adult swings” and I couldn’t find one.

Bar the sits-three-or-four rustic ones on a frame, which are the preserves of toothless, ancient birds named Grandmaw, or teenagers sneaking a smooch.

The only “adult swing” reference I got was “mood swing”.