Friends and family gathered to remember and celebrate the life of Anele “Nelli” Tembe at a memorial service on Thursday.

The service was streamed on video conferencing platform Zoom and was open to the public.

Nelli died on Sunday after apparently falling from the 10th floor of the five-star Pepperclub Hotel in central Cape Town.

The family have also hosted daily prayer meetings ahead of the memorial on Thursday and funeral on Friday. 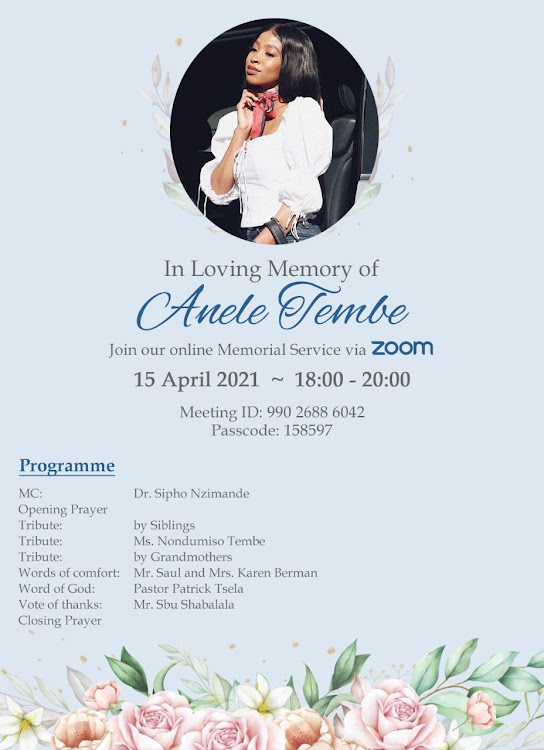 On Tuesday, rapper AKA’s publicist Pumza Nohashe told TshisaLIVE he was “doing as well as can be expected under the circumstances”.

“He lost the love of his life, someone he had taken advanced steps, culturally, to spend the rest of his life with,” she said.

The couple were engaged in February and AKA apparently met with Nelli’s family a few weeks ago to start lobola negotiations.

Phumza said the star was “still trying to make sense of it all” and has his mother Lynne and father Tony by his side.

“The love and support of Anele’s family and a grief counsellor have also been some relief to him,” she said.

Nelli's body arrived in Durban on Wednesday, accompanied by AKA.

The couple were in Cape Town to attend AKA's concert in the city last weekend, when the incident happened.

Witnesses at the hotel described hearing a scream on Sunday morning, followed by a “loud doef” sound. They said they had also heard a man shouting.

Police have confirmed the incident is under investigation.