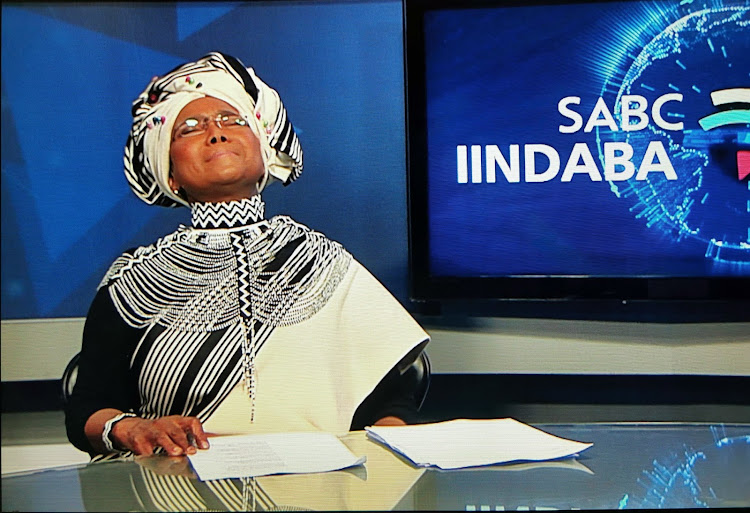 There was not a dry eye across the nation last night when veteran broadcaster Noxolo Grootboom signed off with her signature “Ndinithanda nonk’emakhaya” for the last time.

After 37 years as a broadcaster, Noxolo recently announced her retirement and read the Xhosa news bulletin for the final time on Wednesday.

The bulletin was emotional, with Noxolo ending with a heartfelt message to viewers.

She struggled to contain the emotion in her voice and broke down in tears after delivering her famous sign off.

The broadcast was watched by thousands, with President Cyril Ramaphosa postponing an address to the nation by 30 minutes to accommodate the star’s final curtain call.

“I wish to pay tribute to Miss Grootboom as an outstanding journalist who throughout her 37 years of distinguished service brought historic events in our country and across the world into the living rooms of our nation. We wish Miss Grootboom well and thank her for her many years of service,” he said during his address.

At the SABC, Noxolo was given a massive send-off, with a guard of honour and singing procession following her down the corridors.

Again, the star struggled to contain her emotions and wept openly.

A farewell fit for a queen. 👏🏾🙌🏾♥️
We are blessed to have lived in a time of giants 🍃#NoxoloGrootboomDay #NoxoloGrootboom #History pic.twitter.com/lNelOMQYIh

She was showered with flowers, gifts and a cake to remember the moment.

I loooove my job, am passionate about it. I live it❤️❤️❤️❤️#NoxoloGrootboom pic.twitter.com/dkrsQZnllC

Speaking to TshisaLIVE ahead of her final show, Noxolo said she was a “bundle of nerves” but honoured to be able to have had such a rewarding career.

She joked that she had pleaded for a “quiet exit”, but was overwhelmed with the love she received from people across the nation.

“From a quiet exit to this, so you can imagine how I feel. I told them I don’t even want a farewell party. I am trending but I’m not even on social media.”

“Remember, when I started it was a time when we could not even mention liberation organisations like the ANC or PAC. We could not name the stalwarts, never mind the role they were playing. Imagine coming from that era to where we are today.

“More than anything it is the blessing of an opportunity to conduct live broadcasts for the icons I was once not even allowed to mention by name. It is all I can ask for.”

Noxolo anchored some of SA’s most significant historical events, including the death of former president Nelson Mandela in 2013 and former first lady Winnie-Madikizela-Mandela in 2018.

Social media was again filled with tributes to the star on Wednesday night, with many famous faces praising her professionalism and recounting stories of the impact she had on their lives.

What a moment. What a stellar career. All the things a news anchor should be: Class. Professionalism. Trusted. A reassuring voice even in uncertain times. Thank you Mam’ #NoxoloGrootboom. You have set the bar high. Enjoy your retirement, you have earned it🙏🏽❤️ #NoxoloGrootboomDay pic.twitter.com/n0HSaoxEAD

Noxolo Grootboom is broadcasting goals. The HIGHEST level! What a Queen🙅🏾‍♀️👑🇿🇦❤️

What a moving and absolutely selfless farewell speech! This must go down as one of the best moments of South African television. #NoxoloGrootboom