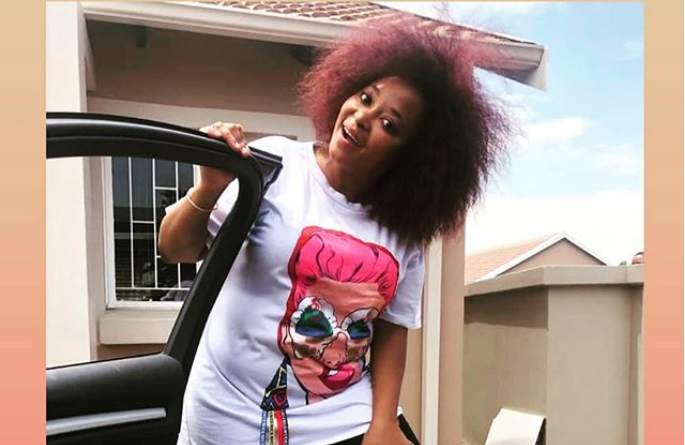 Proving that being in the entertainment requires having a thick skin, Skeem Saam actress Pebetsi Matlaila took to Instagram to share her reaction to being trolled by a security guard and taking it with a pinch of salt.

Pebetsi, who plays Mokgadi on SABC1's popular soapie, took her followers inside a funny incident that happened to her recently, when an unnamed car guard trolled her for not looking “as pretty” in real life as she does on TV.

In a video she posted of herself telling the story, the heavily pregnant actress explained how she went out to find food to feed her cravings. Pebetsi said just as she was about to leave, she noticed  that her parking ticket was missing and went to the parking lot to look for it. Her baby bump made it hard for her to look under the car, so she called the guard to assist.

However, instead of helping Pebetsi, the guard recognised her and started saying: “I think I’ve seen you somewhere ... are you Mokgadi from Skeem Saam ... your son Noah is a troublemaker”, to which the actress eventually replied and said, “Yes, I am Mokgadi ... could you please help me find the ticket ... look under the car?”

Pebetsi told her 300k followers that the guard was definitely distracted and instead of helping out, had a pressing question for the actress that left her shook.

“Why on TV, you look prettier than when I see you now?” he asked.

Pebetsi took the “trolling” with a pinch of salt and laughed at herself, though she admitted that the comment did sting her a lil.

The comments section of the video filled up with people telling Pebetsi not to feel bad because she's one of the prettiest people they know and after venting, the newlywed decided to call her hubby, who she said always tells her just how beautiful she is.

Pebetsi announced back in January 2021 that she was expecting her second bundle of joy.

The actress got married late last year in a beautiful traditional ceremony and just months later, her marriage has been blessed with an additional member to the family.

The smile on her face in that Instagram video said enough about the joy she was feeling in that moment, but just in case it wasn't obvious for her thousands of fans, Pebetsi wrote a brief caption expressing her excitement over the bundle of joy she's carrying.

“Been waiting for this for a long time. Number two. #blessed! was not sure if I was still capable. But then God said yes,” Pebetsi said.