Our matrics are the unsung heroes of this Covid-19 year 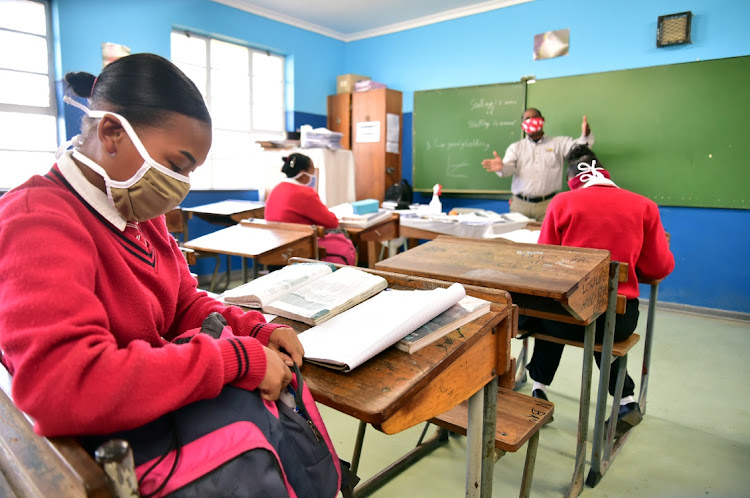 Grade 12 pupil Taryn Claasen, 18, of Bertram Senior Secondary prepares for her Maths class with her teacher Carolus Kerspruy, in background, at the height of the Covid-19 pandemic lockdown in June.
Image: Eugene Coetzee

Millions of heroes were born during Covid-19. Their births have been chronicled in thousands of words, praising their courage as they stepped into the unknown, along with the rest of us.

Within this remarkable assembly of doctors, teachers, officials, retailers, charity workers and brave, outspoken intellectuals is a tenacious, idealistic, extraordinary group of children on the cusp of adulthood.

Protagonists in the gritty, hard-knock narrative that swept their final year of school into choppy, uncharted territory, they have dared to dream — despite the dream having the stuffing knocked out of it.

One day, when Azraa returns to what she wrote, she will remember how brave she was; and how, if she and her peers could withstand this year, they are capable of the same again, and again — no matter how rocky the road travelled.

“From what could be seen as the ashes of our final year, our matric class has risen far above all possible expectations,” she said.

“While noticeable changes have taken place ... our high hopes for a remarkable year have grown; as anyone would expect from such a resilient class.”

A few scant months have passed since Azraa and over a million of her fellow Grade 12s across the country returned to a semblance of “new” normality. Things had changed; much was lost, including time and the precious memories made with friends as the countdown to the end of school began in January.

But still, they rose. “Finally, being able to step out of bed with an aim in mind,” she said. “We were given the opportunity to prove ourselves and (to) make what was left of our year count more than ever before.”

Riebeek matric pupil Robyn Minnaar embraced the same sense of positivity. “I immediately started thinking about what I was looking forward to prior to the (coronavirus) ordeal.

“Thinking about putting my pen down for the last time after writing my final exam is what’s driving me to do my best now.”

Anda Mbola explained how she was keeping her eye on the ball, regardless of the twisty-turning reality into which she and her friends had been thrown by the pandemic.

“I want to be able to tell my grandchildren that I passed matric — even in the midst of a pandemic.

“I think a bit of a bump in the road was just what we needed to remind us of how desperately we want the prize ahead of us.”

Azraa’s words of wisdom are recorded here for every matric pupil — and every parent, cheerleader and supporter behind each one — to remind us that we have already overcome so much; and remain standing.

“These are the experiences that continue to gradually shape you into the person of your near future — the person who will be painting (his or her) own story for others to marvel at, years down the line,” said Azraa.

We salute you, Matric Class of 2020. You are, as author Mary McCarthy wrote, the heroes of your own story.