Tandem bicycles back in style

Time for a comeback: the bicycle-made-for two 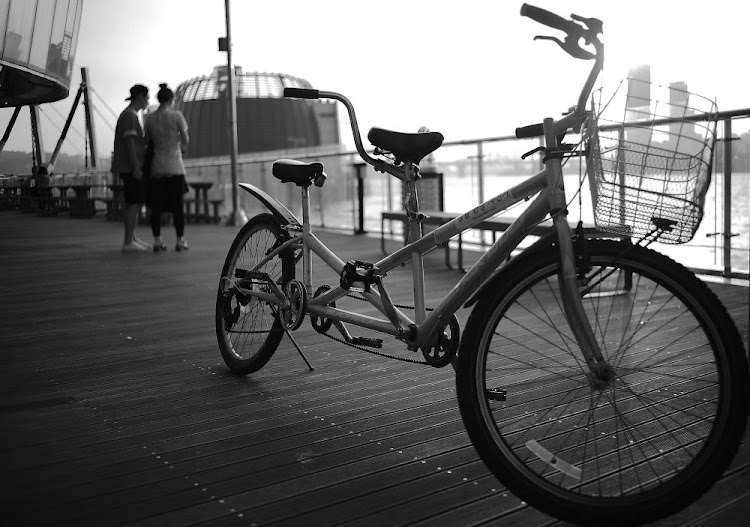 Tandem bicycles are back in styles

Once seen as old-fashioned, the tandem is shaking off its novelty image and sales are soaring, reports recent convert Claire Cohen

It started with typewriters. Then record players. Now, hipsters are coming two-by-two.

Cycling has experienced a serious boom in recent years, to become a £5.4bn (R78.7bn) industry in the UK, with various tribes emerging as a result – the most recognisable being Mamils (middle-aged men in Lycra).

This summer, however, a new breed has come forward to claim a slice of the pie: the tandem rider.

I first thought I was noticing an upswing due to recently becoming a “twin” owner myself.

Not so – friends have reported spotting tandems in parks, cycle lanes, on canal towpaths and whizzing through town centres.

And, more often than not, they’re being ridden by millennials. Simply, two seats are the trend du jour.

“In the Seventies, the popularity of tandems was dying.

“They were seen as obsolete and unfashionable, and no one was making them,” says Peter Weeks of the Tandem Club, which has 3,000 UK members.

“Now, the market and our membership is booming.”

Ruth Hargreaves of JD Cycles in Ilkley, Yorkshire, agrees. “Even as recently as 20 years ago, tandems were seen as a novelty,” she says.

“But today they’re built using materials of the same quality as road and mountain bikes.

“There’s nothing remotely old-fashioned about them.”

She has been “surprised by how much young people are buying them” and says that electric tandems make up 10% of their total bike sales, despite only having been on the shelves for a year.

A search for #tandembike on Instagram brings up more than 42,000 pictures of mostly fresh-faced couples travelling the world on their twins.

“Mum and Dad each have a tandem, with a child seat on the back,” he explains.

That a new generation of tandem-riders are putting the pedal to the metal might come as some consolation to Lionel and Joyce Joseph.

The couple, both aged 95, announced this week that they are giving up their tandem after 78 years, citing poorly maintained roads and inconsiderate lorry drivers near their Surrey home.

The story caused indignation on social media, with commenters calling it “depressing” and locals lamenting they’ll no longer see the Josephs out and about.

I’m not surprised. Because to be a tandem owner is also to be public property. This is not an activity for the shy and retiring.

Pedestrians stare, often yelling “my parents had one of those!” as you fly past.

A lifelong non-cyclist, I have always been to bicycles what Boris Johnson is to zip-lines.

Yet, a few weeks ago, my partner and I bought a 1951 Coventry Eagle tandem and spent three days cycling 125 miles (201km) between London and Paris.

A two-seater, it turns out, is perfect for pairs, where one person is less experienced.

Yet not for nothing are these bikes called “divorce makers” – whatever direction your relationship is headed, a tandem will get you there faster.

Conjoined on a bicycle, communication matters.

There is jargon: the “stoker” is at the rear (often the novice), who must power the bike and grit their teeth through endless “are you pedalling back there?” jokes (in para-cycling, the stoker will be the person with a visual impairment or other health condition).

The “captain” is up front, controlling the direction and shouting instructions.

You must learn to start pedalling, brake and stop in unison, and God forbid anyone moves around, causing the entire bike to wobble.

Being the sort of millennials who own a typewriter and gramophone, we opted to buy a vintage two-seater from eBay.

The reality, though, is that it weighs the same as a light motorbike and is uncomfortably small.

Not to mention the fact that it turned out its previous owners used it to do the World Naked Bike Ride.

If a tandem doesn’t sound like your cup of tea, there’s still a way to get in on the action.

Forget flamingos and pineapples; tandem motifs are the latest kitsch must-have, on everything from walls to wedding invitations.

Silk pyjama designer to the stars, Olivia von Halle, featured a white one outside her west London shop during this year’s Chelsea Flower Show; perfect for Instagram poses.

Luxury wallpaper maker, Cole & Son sells one design, featuring cartoon cyclists atop a nine-seater tandem, which can be seen adorning the walls of many-a well-heeled nursery.

“There’s something intrinsically romantic about a bicycle-made-for-two,” says Ruth Hargreaves.

Indeed, a growing number of couples are hiring vintage tandems on which to wobble off after their wedding celebrations – tin cans rattling behind.

My own nuptials in the autumn are dangerously close to ending the same way. I’ll just make sure to wipe down the seats first. – The Daily Telegraph