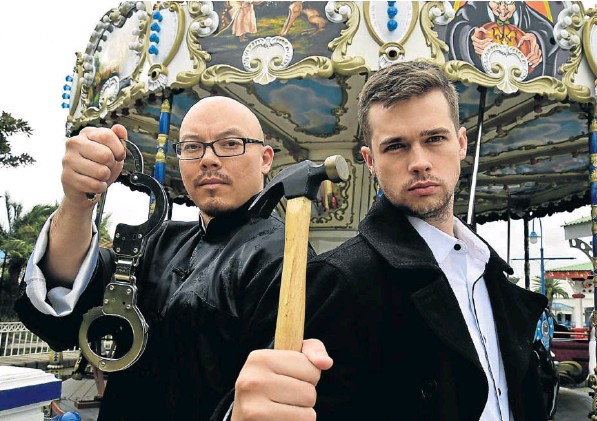 A joker who is a jack of all trades with a few aces up his sleeve and a Houdini who likes to hammer nails up his nose are two of the hot tickets on the Fringe illusionist programme.

Mentalist Brendon Peel and escapologist Li Lau are putting their brains – and Li’s body – on the line in Carnival Sideshow and Other Magical Things at the Masonic Hall Back until Monday.

Brendon also is presenting his solo magic show Mysteries of the Mind at the same venue.

“It is such a niche and there are so many nuances so you can basically go to both of our shows and enjoy them as they are totally different,” says Brendon.

He also rather charmingly gives a shout-out to his fellow illusionists on the programme.

“I definitely will go and see all the shows”.

Brendan is at 25 already a veteran of eight Festivals but Li is a Grahamstown newbie.

“The show will be drawing on both our strengths,” says Li, who is known in civvy street as Lee ah Kun, 36, or to his fans as “One Crazy China”.

“I focus on the sideshow as an escape artist, which dates back to the old vaudeville times in America, and I think I’m one of the few doing this in South Africa.

“The escape that we are doing at the Festival is one of a kind, it’s very dangerous and it makes extreme use of my skills. I will be restrained so it will be like a ‘William Tell’ kind of escape.”

Li and Brendon have been working hard not just on the stage act but also on building the equipment called for in this kind of carnival show.

“We’ve put in a lot of hours building this contraption,” said Brendon of the escape “trap”.

“There are not many props when it comes to mentalism – most of them are pocket-size such as a Rubik’s cube or a pack of cards. You have a lot more gear if you are an escape artist – we needed a bakkie just to take it all to Grahamstown!”

The duo promise a thrilling finish to Carnival Sideshow, such as Li holding a flaming torch in his teeth while he calmly unpicks a lock, or hammers a nail up his nose, eats and breathes fire (literally), walks on broken glass, suffocates in a plastic bag, chains himself up or plays staple-gun roulette.

“We don’t want to give away the whole bang-shebang but [the show] involves a Rubik’s cube, sand timer, trigger and there is also a crossbow lined up at Li’s head. It’s definitely not for the faint-hearted,” Brendon warns.

Brendon, on the other hand, has a less dangerous approach which is no less mesmerising, focusing on classical stage mentalism or mystifying people with his walk-around magic.

He’s sharp with his card tricks, has a nifty line in patter and when you throw in an engaging sense of humour, it’s clear why his shows sell out so quickly.

He is the youngest mentalist to go to the festival – directing and performing a successful, full length solo show at just 18.

Inspired by performers such as Derren Brown, David Blaine, and Andy Nyman, Brendon has been creating and designing many of his own magic effects.

He studied drama and journalism at Rhodes University – lecturers such as Andrew and Janet Buckland left their mark – before doing a post-grad business qualification and says “all that adds up to doing what I do, as all three tie together”.

Li, on the other hand, studied criminology at Unisa and now trains those in the frontline of DNA projects how to secure a crime scene.

“If a policeman comes and handcuffs him, he can get out,” says Brendon.

Let’s hope he can do likewise today.

Carnival Sideshow (and Other Magical Things) is today at 12.30, tomorrow at 2.30 and on Sunday and Monday at 4.30pm. Mysteries of the Mind is every day until Sunday July 8 (times vary).