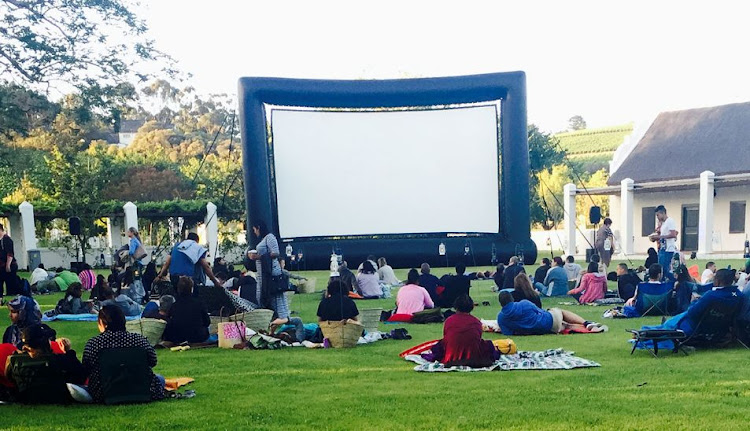 The organisers of a pop-up movie night at Cape Recife High School in Summerstrand on Friday are inviting families to a sunset picnic before watching a film on a giant inflatable screen.

There also will be several food trucks stationed at the Sunset Picnic Cinema.

Summerstrand entrepreneurs Clinton and Tess Myburgh started offering the pop-up cinema experience earlier this year in the Eastern Cape, with one of its first movies screened on the sports fields at D F Malherbe High School in Walmer.

“Pop-Up Cinema takes cinema out of the theatre, and into the city and wilderness constantly redefining the cinema experience,” Clinton Myburgh said.

“Our head office, in Cape Town, has been in this specialised business for more than 10 years, and we are registered with the Film and Publications Board.”

He said Pop-Up Cinema could also offer “hybrids” of a sunset picnic with a drive-in, explaining an Easter event where half the audience sat and picnicked on the grass in front of the big screen and the other half sat in their cars at the back.

“[On Friday] we will wait until the sun goes down and then the magic starts. Gates will open at 5pm and the film probably will be shown at 7 or 7.30pm, depending on the light,” he said.

“Our screen is built on the same principle as a jumping castle, but once it is up we don’t have to keep on pumping it, it stays up.

“We have the largest inflatable screens in Africa so the picture resolution is outstanding.”
The husband-and-wife duo, who are life coaches, said: “We are very excited, the younger generation don’t know what a drive-in is although you can imagine the nostalgia for those who remember drive-in movies”.

Each client can choose their own film, so long as it has finished on the circuit – and the Myburghs will also screen one or two shorter items before it got dark enough to show the film.

Tickets for Friday night’s film range from R30 to R65, with popcorn included in some combinations, and children under five entering free. They are on sale at Quicket and there will be a cash bar.

There also is a Pop-Up Cinema screening on April 21 at Sardinia Bay’s Sards Bark Park.