Don’t name my grandchild that 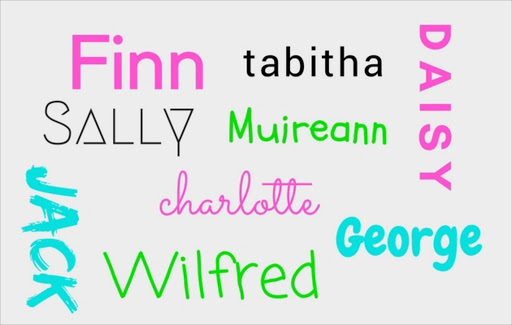 One in five grandparents admits to hating their grandchild’s name, and Rosa Silverman meets those who haven’t kept it a secret.

“You know, I still have trouble with the name,” confides Mia Norris to her daughter-in-law Sharon in the British Channel 4 sitcom Catastrophe.

Mia, played by the late Carrie Fisher, is referring to the Irish moniker Muireann, which has just been bestowed on her new baby granddaughter.

“How do you say it?” she persists, with her customary tactlessness. “Moron?”

The scene may be played for laughs, but it will have rung true for many parents and grandparents.

A new survey from Mumsnet and Gransnet, the online parenting and grandparenting forums, reveals a fifth of grandparents say they hate or have hated their grandchild’s name.

Among the reasons given for such grandparental distaste is that – like Muireann – the name is too hard to pronounce.

This does not explain, however, why names loathed by grandparents include Charlotte, Jack, Sally and Finn.

Other objections raised by grandparents include the name being too odd, too “made-up” or too old-fashioned; annoyance that their suggested name hadn’t been used; and annoyance that a family name had been overlooked.

For some, the name is just too ugly. Aurora, Elijah and Tabitha were cited among the offensive choices.

To Su McArthur, a grandmother-of-five from Berkshire, none of the above are as repugnant as the names of her own grandchildren.

McArthur, 71, is something of a Mia Norris when it comes to embracing her children’s choices – but not because they aren’t traditional enough.

While she approves of “Daniel” for her daughter Lucy’s first son, and “Tilly” for her son David’s first daughter (“both classic names”), she is far less enamoured of “George” , the name of her daughter’s second son, and “Elsie”, that of David’s second daughter.

“George sounds as if somebody’s dropped a wet blob of cement.

“I don’t like it at all, especially when you look at this tiny baby and they’re telling you it’s called George,” she says, with a candour that is either refreshing or alarming, depending on whether you’re her daughter or not. (Tiny baby George is now 19 and probably old enough to handle his grandmother’s opinions.)

The name Elsie she deems equally “heavy-sounding” and old-fashioned – one that evokes the image of “an old lady with droopy drawers”.

But her greatest disgust is reserved for the name of her poor five-year-old grandson, Wilfred.

“Wilfred [sounds like] a glove puppet or someone with a flat cap and a whippet. It’s a horrible name,” she shudders.

Does her son, 45, know she feels this way about his little boy’s name?

“I made it very clear I didn’t like it when [Wilfred’s mother] Abigail was expecting. Her mother said, ‘If it’s a boy they’re going to call it Wilfred,’ and I roared: ‘Oh no, that’s awful!’ I can’t call him Wilfred so I just call him ‘dear’.”

Fortunately, her children are not among the 6% who, the survey found, have fallen out with their parents or in-laws about their choice of baby name, or the 4% who said the disagreement was so bad it ended their relationship.

“I don’t think my children mind,” says McArthur, a retired teacher. “I am hideously outspoken and they are used to me. But I try not to be contentious.

“They’ve run their children’s names by me at the time and I’ve either said ‘Oh, I like that,’ or if I’m not too keen I just pull a face. Wilfred doesn’t know I don’t like his name.”

More than a third of parents (38%) say that when it comes to choosing babies names, it’s none of the grandparents’ business, while 31% of grandparents say the same.

Judy, 66, from Devon, who only liked three of her five grandchildren’s names when they were born, is among this minority.

“It’s one of those things parents are entitled to do by themselves, unless they ask the grandparents’ opinion or invite them to choose a middle name,” she says.

She was careful, therefore, not to share with her son her dislike of the name he had given his first daughter. (I press her for the offending name but she is too wary of upsetting her family to reveal any specifics.)

Yet she did offer her daughter-in-law some unsolicited advice on a different grandchild’s name, and was given short shrift: “She didn’t feel it was my place to give an opinion.”

In some cultures, however, naming conventions mean grandparents and others do indeed get a say in this personal process – or the parents’ views carry far less sway.

In Swahili-speaking tribes in Kenya, for instance, a baby’s first name is often chosen by an elderly relative, while in some Ghanaian communities, a name is automatically assigned based on what day the baby is born.

Until fairly recently, first names in Britain would repeat from one generation to the next, leaving some clans packed so full of Johns and Roberts, it is hard to imagine how anyone ever knew which male was being referred to.

Today, it is (almost) as acceptable to honour Keira Knightley as Great Aunt Mabel when choosing your child’s name, and anyone who has spent time in baby groups of late will notice the range – and often daftness – of the current crop of newborn names.

Some of their grandparents, one assumes, must be bristling with disdain. They would do well not to show it.

As Judy says: “It’s a wise grandmother who knows to keep her own counsel.” – The Daily Telegraph