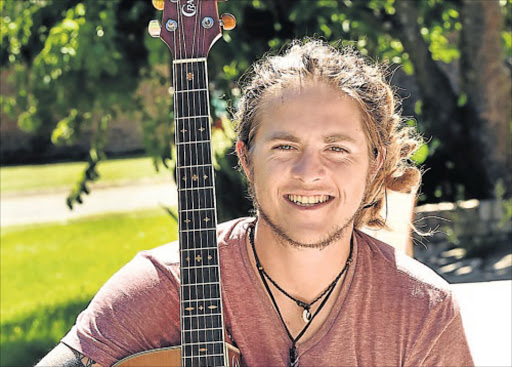 WHEN you look at the music scene in South Africa, you cannot help but notice that many of the countr y’s chart-topping artists have some sort of link to the Eastern Cape.

Now another local act, Port Elizabeth’s Alex Cavan, at just 22, has scored one of the biggest breaks an upcoming artist could ask for.

Cavan, who launched his debut CD last year, has been included on an international compilation album, A Breath of Fresh Air, which was produced by the UK-based recording company Negart Records.

Cavan’s single, We ’re To Blame, is the second song on the 60-track, three-disc album – and he is the only South African to be included. All of the artists selected for the album are unsigned.

Sporting a Rastafarian inspired do, with blonde dreadlocks, the unassuming muso has been gaining popularity across the Bay by performing at popular venues such as Bridge Street Brewery and Hooters, and also in Johannesburg at Rumours Lounge.

How did you hear about the UK album opportunity?

“A family friend in the UK heard about the competition requesting demos to be featured on a compilation album to be released in the UK, US, Europe and East Asia. “I sent through We ’re To Blame, and almost immediately got a response from Negart Records with positive feedback about the song.”

When did you find out We ’re to Blame was selected for their album?

“It was literally two days after I sent the song in November last year.”

What is We ’re To Blame a bout?

“The song was inspired by all the nonsense and bad stuff happening in the country, with people blaming each other but never looking at themselves and taking responsibility. “Instead of always complaining about how life sucks, it’s about actually coming up with solutions on how to make things better, encapsulated in an eclectic sound.”

How do you feel about being the only South African on the album?

“It’s a great honour to be the only one. It can only bring me success, which I look forward to.”

How did you start making music?

“I played guitar throughout high school. “After finishing school, I worked at The Music Kitchen in Newton Park. “At one of our open mic sessions a friend told me to get up on stage and sing something. “I’ve never looked back.”

Did you grow up in Port Elizabeth?

“I was born here, but when I was 11 my family and I moved to Scotland. “We moved back when I was 14 and I’ve been here ever since.”

Tell us as bit about Follow Me, your debut album.

“It’s a 10-track album with nine original songs and a cover of Bob Marley’s Redemption Song. It took two years to complete and basically tells the story of my journey thus far. I released it on October 16 last year.”

Who’s the special girl in your life?

“I have a daughter. Her name is Ava Summer Cavan and she is turning one t o d a y. One of the songs on my own album, Av a ’s Lullaby, was written especially for her.”

Are you concentrating on music fulltime?

Have you always known you wanted to be a musician?

“I never really had a plan, but my friends always said I could sing. After the open mic session that one night, everything seemed to flow in the direction I’m currently headed in.”

Who are your musical influences?

How would you describe your sound?

“I’d say I have a unique sound. I use a loop pedal which allows me to use my own instruments, my mouth, beat-box and harmonics. I call my genre experimental . . . which I made up, by the way!”

What do you think of the Bay music scene and are there any local artists you’d really like to work with?

“There ’s an overload of talent in PE which doesn’t get the recognition it deserves. I love the music being produced here. “Claire Venn is one of the musicians who got me started and she’s been a big inspiration to me.”