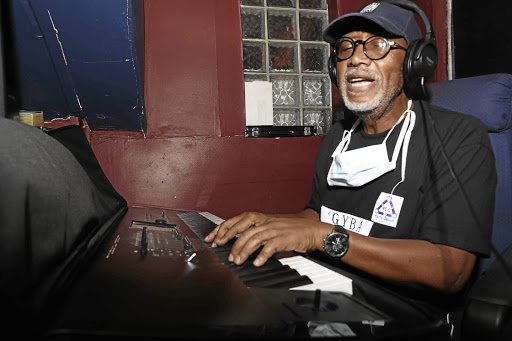 Sipho Mabuse reworks his 1980s megahit Burn Out in the studio./Veli Nhlapo

Legendary singer Sipho "Hotstix" Mabuse has decided to put a coronavirus twist on his most famous hit song Burn Out to encourage the public to take the pandemic seriously.

Mabuse, who has been keeping busy in his studio during the national lockdown, has re-recorded his 1987 hit song and added Covid-19 lyrics to spread the message to South Africans. The new version of Burn Out will be dropped tomorrow on all digital platforms. "I have used Burn Out because I knew it is a song that people will easily relate to. I have seen in the past two weeks famous songs getting adjusted to suit the pandemic that the world is facing at the moment. My version of Burn Out encourages the country to take coronavirus seriously because it is real.

"I am further encouraging people to stay safe and healthy by sanitising and washing their hands. If we all stick together, we can get through this. Practice social distancing and remember, we are all in this together."

Mabuse said he has embraced staying at home during the lockdown because it gives him a chance to do some of the things he enjoys most, like gardening.

The original Burn Out song became one of the first major crossover hits in South Africa during the early 1980s, and the album sold more than 500,000 copies. Over the years, the song has been remixed by various artists including Timothy Moloi.

Meanwhile, another famous hit song that has added a coronavirus twist is a charity song composed by late pop star Michael Jackson and Lionel Richie, titled We Are the World.

The song was recorded by USA for Africa in 1985 and was produced by Quincy Jones and Michael Omartian.

The single sold more than 10-million copies worldwide. The new version of the song was released on March 24.