“We are thankful that with the support of our city leadership and dedicated stadium team, we can continue to give back to our precious asset,” said Stadium Manager, Mr. Mpho Mokonyama. “With the recent launch of various technology and digitally focused initiatives, we can continue to innovate and to bring value to our communities.”

Winter may have hit the Bay, but there is no excuse for missing out on this entertainment extravaganza, as it will be streamed LIVE ONLINE, allowing Bay residents to enjoy world-class entertainment from SA’s best comedy and music talent in the comfort of their own homes.

Tickets to attend the virtual event LIVE via streaming are available for only R50 from Quicket for the entire family. 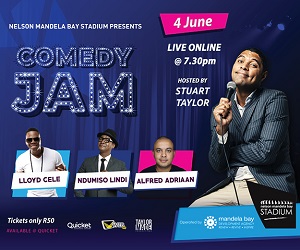