Ntokie goes from couch potato to athlete of the year 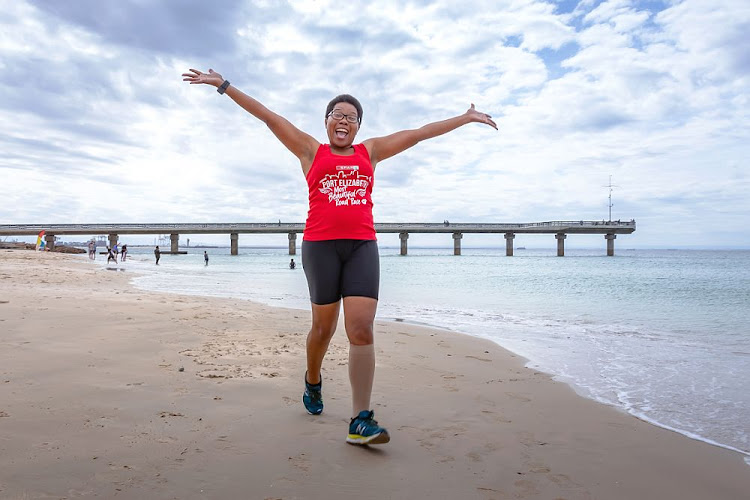 Dr Ntokozo "Ntokie" Dambuza went from being a couch potato two years ago to winning athlete of the year at Crusaders Athletic Club in 2019
Image: Leon Hugo

From couch potato to athlete of the year – in two years. That’s the journey Nelson Mandela University pharmacology lecturer Dr Ntokie Dambuza, 40, has walked, shuffled and run, changing her from being an overweight lymphedema sufferer to a star Crusaders Athletic Club member. She has smashed personal goals and has set the bar even higher for 2019.

Here is how she did it

I was a couch potato.

In 2011, I had to do a medical for life insurance and the doctor wrote that I was overweight.

That bothered me and I thought maybe I need to join a gym, but I’m that kind of person who joins and just never goes – even with points to earn.

In 2014, I came to Port Elizabeth. Unlike Cape Town, public transport was not so convenient and expensive and I didn’t have a car.

I cancelled my gym membership and that’s when the couch potato came in as I also had a lot of work.

Somewhere inside there was the desire but not the motivation. The idea of waking up on a Saturday to run did not appeal to me.

Then in 2016 a couple of my friends signed up for the Algoa Big Walk and there was a big buzz. We took photos and there were lots of posts on Facebook.

So then I invited my friend to a parkrun and we said, ‘this is good, we must do it more often’.

Then one of my friends started running. I had thought we were going to walk and chat, but I could not keep up.

I said to myself I will run from pole to pole and walk in between.

I had shortness of breath and I was feeling dizzy, but I did it.

Then I saw my times were going down – I was in after 45 minutes where I used to take an hour!

I was delighted. It fascinated me that you run a little bit – just run from one pole and then walk – and you can improve your time.

Ntokie’s next step was to enter a “real race” (parkrun is deemed a run, not a race) later that year and buy running shoes on a Black Friday sale.

I bought new shoes and that’s when the magic happened.

I ran, very slowly, and I noticed I was not tired if I shuffled all the way to the finish line and, if I do this shuffling thing, I noticed that my time dropped.

But I was scared of joining a running club while I was still a tortoise.

When I saw that I could shuffle at a pace of between seven and eight minutes for a kilometre, I checked which club was in the vicinity and I found Crusaders in Park Drive.

A friend said she was doing the Aspen 10km on December 3 and I went and I joined Crusaders, the same club which was organising the Aspen.

But I ran alone on December 3, the race day, as my friend had an injury.

I went, registered, got my race numbers, and Crusaders invited me to join and run with them.

It was a huge achievement and that picture of me and my medal was all over Facebook!

Now I had this desire to run every chance that I got.

So I signed up for the Bluewater Bay 15km race in January 2017 and I ran, walked, ran, walked and I did it.

Then I did Two Oceans in 2018. It was fun, but it was a long 21km with lots of hills and t . There are just too many people around you.

I found that I do have the ability to run faster, but my lungs won’t let me so I have decided to train my lungs now. I am still improving my fitness.

Winning the Crusaders’ Athlete of the Year was a surprise because there are club members who have done Ironman and marathons, but from where I look at it, it’s not just about what you have done, it’s what it took for you to challenge yourself and achieve.

It was based on resilience, I took on a lot of races after an injury, I also was assisting a lot and I’ve been challenging myself to do more half marathons, I’ve done nine now.

My 2018 Aspen race was my best ever, I did it in 1 hour 9 minutes and it was my personal best. I beat my last year’s time by nine minutes so this year I have pressure – I have a lot of training to do!

Slow and steady wins the prize. Most people who were running with me and were faster, are now not even doing the parkrun.

Know your passion. You need to have a passion for running. People will do one race out of excitement and then they will have excuses for the next one.

Believe in yourself. If I can run a whole 15km without stopping, you can do it too – and probably better than me!

Make time. From being someone who could not run at all, I now run half marathons. We are super busy with our schedules but you have to make time for your runnin

Find a buddy. I will do anything for a novice runner to be able to motivate someone.

What makes Ntokie’s running achievements all the more remarkable is that she suffers from lymphedema after the lymphatics in her left leg were damaged.

This means the lymphatic fluid does not drain away and her foot and leg swell up. If left untreated this can lead to infections, disfigurement, pain, and disability.

“That leg is weaker and it gets tired, because of the poor circulation, but I don’t get sore.

“I was diagnosed 10 years ago and when I read that I probably could not run, or walk more than 5km, that for me was a limitation.”Due to the fluid build-up, her legs are puffy and she has to wear a medical compression stocking.

“It was a valid excuse not to run, so I went looking for someone who DID run.

“I found a girl who had lymphedema and she had a blog and she ran marathons – she was stubborn!”

There is the possibility that she may damage her foot more due to the action of throwing her feet onto the ground while running.

But she says that will not stop her from reaching for her goals and she has not had to see a doctor for her condition since 2016.

“I will see a doctor when I have pain, but as long as I wear the compression stocking I am fine – I’m not going to stop running!”