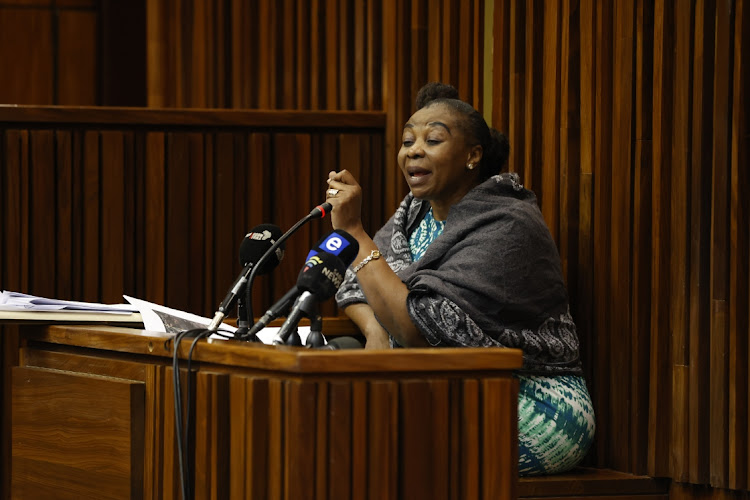 The police officer who got the ball rolling on ending serial killer Nomia Rosemary Ndlovu’s murder spree admitted on Friday there were times when he thought he wouldn’t nab her.

“I started working on this case in 2015. There would be a time when I would leave the file for two or three months, but then something would stir in me, saying, ‘Let me do something on this case’,” said Sgt Keshi Benneth Mabunda.

On Friday, his hard work paid off and he beamed with pride after Ndlovu was found guilty of killing six of her loved ones, including family members and her lover Maurice Mabasa.

The six were killed between 2012 and 2018, apparently for funeral and life insurance cover Ndlovu had taken out on them.

She was also found guilty of conspiracy to murder her sister Joyce and her five children and the attempted murder of her mother, Maria Mushwana.

The 46-year-old former police officer was also found guilty of  defeating the ends of justice and defrauding four insurance companies.

Earlier in the trial, TimesLIVE reported how Mabunda had explained that his suspicions around Ndlovu were raised when he saw her walk into an office opposite his carrying a pile of insurance policies she needed signatures on so she could submit insurance claims.

After years of hard work, Mabunda and the prosecutor in the case, Riana Williams, received praise from judge Ramarumo Monama for the watertight case they produced.

Monama said had it not been for Mabunda, “the files would have been in the police station gathering dust”.

Mabunda and Williams made a formidable team, with Mabunda acting as the prosecutor’s right hand. The two would arrive at court with bags of documents, and steered each other through witness after witness.

Monama also thanked Ndlovu’s defence attorney, Vincent Soko, saying he was aware there were times when he looked like he wanted to give up.

The legal aid lawyer waded through the case, taking instructions from Ndlovu after each witness.

Despite her shaky testimony and questionable version of events, Soko last week stood before the court and pleaded for the charges to be dismissed, saying the state had provided only circumstantial evidence.

Seated in court on Friday were Ndlovu’s brother Director and Mabasa’s brother-in-law Justice.

After the guilty verdict, an undoubtedly troubled Director tapped his foot, took out his phone and fiddled, trying to contain his emotions.

Justice said that for him and his family, Ndlovu was heading to jail carrying deep, troubling and dark secrets. Where did Maurice draw his last breath, and who were the people who had his blood on their hands?

He does not believe Ndlovu had acted alone when killing his brother, and neither does he believe the spot where they found his butchered body was the place where he died.

The National Prosecuting Authority welcomed the convictions, with spokesperson Phindi Mjonondwana saying they were hopeful the court would not deviate from the prescribed minimum sentence of a life term for each of the murder counts.

If Mabunda has his way, this isn’t the last time Ndlovu will stand in the dock and hear the word “guilty” pronounced against her.

Ndlovu allegedly ordered a hit on Mabunda in 2018 following her arrest. This plot was brought to the fore by one of the hitmen who Ndlovu had initially recruited to kill her sister. They agreed to carry out the killing, but turned to police instead.

The hitman learnt of plans Ndlovu was hatching from behind bars to have the investigating officer killed, allegedly believing he was the main reason she had been denied bail at the time.

For this, Ndlovu will face yet another criminal trial.

While the court only convicted Ndlovu of the six killings involving her sister, her cousin, two of her nephews, her niece and her lover, Mabunda told TimesLIVE there could be more victims.

He was planning to head back to the drawing board to reopen other cases which may see Ndlovu face more criminal charges.

Ndlovu needs to prepare for a different life behind bars. After being kept as an awaiting trial prisoner for more than three years, she will soon make the switch to join other convicted criminals.

The former police officer, who was known to be generous and a fan of slot machines by her colleagues, was composed as she stood in the dock, hearing the guilty verdicts land one after the other.

In the absence of her acknowledging she played any part in killing the six, she has never apologised for her crimes.

Justice, however, said an apology would never be enough, nor acceptable, for what she had done.

Monama highlighted the uniqueness and shocking nature of the case, saying the last the country had ever heard of something like this was 89 years ago when a nurse killed her two husbands and her son through poisoning.

Ndlovu returns to court on November 5 for pre-sentencing proceedings.