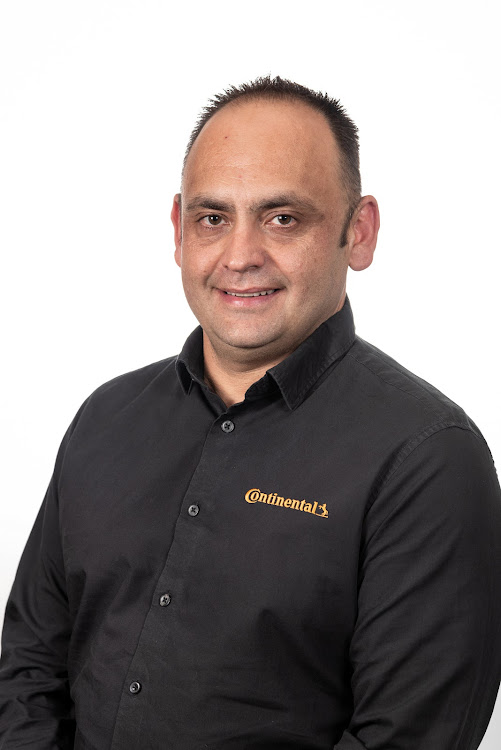 GOING PLACES: Continental Tyre SA’s outgoing GM for manufacturing, JJ Dowling, has relocated to the US to take up the position of production manager at the Sumer plant
Image: SUPPLIED

Ahmed Boualam is the new GM for manufacturing with responsibility for overall management of plant operations, while Ramoabi Moeng has been appointed deputy plant manager, supporting Boualam with the running of the facility.

Boualam was seconded from Continental’s South Carolina Sumter tyre plant in the US, where he served as plant manager for the past two years.

Continental Tyre SA’s outgoing GM for manufacturing, JJ Dowling, has relocated to the US to take up the position of production manager for the Sumer plant.

Continental Tyre SA MD Martin Buday welcomed Boulam, and thanked Dowling for his work and commitment to the business over the years.

“Our Gqeberha plant in SA is not new to Ahmed as [he] worked here for three years before his move to the US.

“I am certain that he, along with our newly appointed deputy plant manager Ramoabi Moeng, will be a force to be reckoned with as they use their combined experience and expertise to successfully steer the manufacturing side of our business,” Buday said.

Boualam has been involved in the tyre industry since 2007, starting in his native France as a production management engineer before moving up to production manager in the curing and final finishing areas.

He joined Continental in France in 2011, initially as area manager in the Curing and Mold Shop, and later in the hot preparation and mixing room.

A three-year stint as production manager for the Continental Tyre plant in SA followed in 2016, before he was selected to head up the Sumter plant in 2019.

“It is fantastic to be back in SA and I look forward to working with the local management team to continue the transformation of our facility as we work towards increasing the production of light truck tyres.

“While optimising the output of our current assets, we are working closely with our colleagues in Hanover and will be making further investments in our factory to expand our production capacity for this important sector,” Boualam said.

He said the goal was to make Continental Tyre SA a major producer of light commercial vehicle tyres within Continental globally, and supply tyres of the highest quality to more markets around the world.

He is a qualified mechanical and production engineer, and has a master’s degree in Business Management which he completed in 2005.

As the new deputy plant manager, Moeng has gained vast experience in the manufacturing sector since 1997.

He spent 11 years in vehicle production, including a one-year training stint in Germany, before joining a pharmaceutical company in 2008 where he headed up the engineering, production and operational projects portfolios over the ensuing seven years.

Moeng joined Continental Tyre SA in 2016 as maintenance manager, and was selected to lead the manufacturing engineering technologies team in 2018, a position he held until his appointment as deputy plant manager in August 2021.

“I am looking forward to learning more about the tyre manufacturing operations under the leadership of Ahmed and the rest of the CTSA executive committee team, while ensuring that we produce quality tyres on time and at competitive costs for our local and international customers.

“Part of my responsibilities includes the role of regional co-ordinator for Continental’s Sustainable Production of Quality Products initiative for Europe, Middle East and Africa (EMEA).

“This involves ensuring that our local plant is fully integrated into Continental’s global quality structures and that we consistently produce tyres of the highest quality for our customers around the world,” Moeng said.

Moeng has a national diploma in electrical engineering, a diploma in business management and a qualification in advanced maintenance management — the latter from the Augsburg University of Applied Sciences in Germany.

He completed a management development programme in 2006, and followed this up with a master of business administration degree from Nelson Mandela University in 2012.