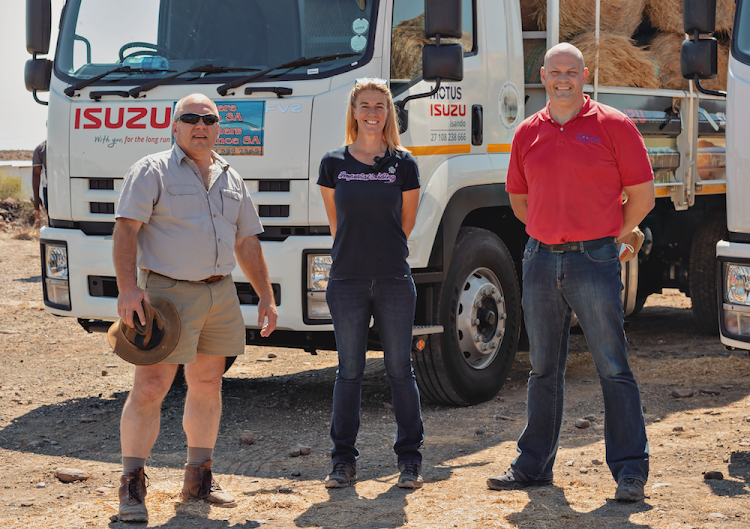 The drought in SA has threatened the livelihoods of many farmers. Isuzu has worked in partnership with non-profit organisations Farmers Assist SA and truck dealer Motus Isuzu Isando to reduce the impact of the drought on farmers.

The third load of fodder, food and farming essentials were delivered last weekend in Merweville in the Western Cape. Earlier this month, fodder and food were delivered to farmers in Tolwe in Limpopo and Vanwyksvlei in the Northern Cape.

Motus Isuzu Isando franchise MD Le Roux Roux is well acquainted with the plight of the agricultural sector and believes that if farmers cannot produce, the country will be in trouble.

“The farmers are in dire need — they have no money for food or even to send their children to school. While Mpumalanga and the Free State received good rain and the farmers expect a good harvest, farmers in the north of Limpopo had to slaughter their game animals because of the drought conditions. There is also a big need for help in the Northern and Eastern Cape provinces,” Roux said.

The dealership supports Farmers Assist SA with two new FVZ 1400 trucks, two drivers and fuel. The trucks, which will be used to supply feed to drought-stricken areas, are customised with major drop sides and higher sides to enable the transport of additional loads.

The Central Karoo, specifically, has been struggling in the past seven years. With no rain or feed, diminishing livestock and continual financial and emotional blows, farmers are at their wits’ end.

According to Clem Olivier, the secretary of the local agricultural union, the veld will take between four and seven years to regenerate should the area receive consistent rain during the summer rainfall season.

Charles Muller, who has been a farmer in Merweville for 46 years, said: “We are trying to survive the worst drought ever. There’s no more natural vegetation left on the farm; we are dependent on these fodder donations. The feed is expensive, and due to our remote location, the delivery costs are extremely high. These donations that we are receiving are worth gold.”

South Africans have responded with grocery donations, among other things, and while there have been generous fodder donations, Farmers Assist SA founder Ronel Steenkamp said the biggest concern is fuel to get the donations to the farmers. “Some farmers can’t even pick up the feed due to a lack of funds for fuel. We need all the support we can get. We thank Isuzu SA and Motus Isuzu Isando for walking the extra mile with us, you really are with us for the long run.”

Gishma Johnson, Isuzu corporate communications manager, said that one of the company’s corporate social responsibility objectives is to help communities in crisis. “Funding the right partners to get the job done provides evidence that much can be accomplished when you work together. We work closely with our dealers across the country to ensure that an optimal community support footprint is in place.”

In the Eastern Cape, Isuzu has provided Gift of the Givers with three trucks, fitted with water tankers, to transport water from boreholes to various communities. The organisation has been working in drought-stricken areas since July 2017.

With 35 boreholes drilled in the province to provide much-needed drinking water to impoverished communities, distance and accessibility still posed an immense problem for the community of Graaff-Reinet and the greater Karoo. Gift of the Givers is able to transport and deliver 22,500l of water a day.

With the outbreak of Covid-19, the need for water in drought-stricken areas has not only been for drinking but became essential for hygiene and sanitation to curb the spread of the virus.

Responding to natural disasters is a key pillar in Isuzu Motors SA’s corporate social responsibility strategy. The bakkie and truck manufacturer responded swiftly to the needs of the community when the Covid-19 pandemic hit the country. Within eight days, the Isuzu team completed renovations at Livingstone and provincial hospitals in Nelson Mandela Bay, providing increased capacity for Covid-19 patients who required screening, testing and hospitalisation.

The company swiftly made its media fleet — which was stationary during level 5 lockdown — available to Gift of the Givers, and offered its marketing fleet to the department of health sciences at the University of Pretoria. These vehicles were used to transport medical supplies, food and personal protective equipment to remote communities across the country. Isuzu also rented space from its logistics supplier, DSV, to store medical supplies for the public hospitals in Nelson Mandela Bay, while Isuzu trucks were mobilised in this mission.

Johnson said the company repurposed all bakkies and trucks earmarked for promotional activities to support Covid-19 initiatives. “The need across the country was immeasurable during the hard lockdown. We received daily requests for support from all walks of life. We assisted where it was possible and, through our partnerships with Gift of the Givers, the Nelson Mandela Business Chamber, the University of Pretoria and a number of others, we reached many communities and I believe made a difference in those people’s lives,” Johnson said.

She cited the example of food redistribution company Food Forward, in Port Elizabeth, which desperately needed to transport supplies from Joburg. “We sent two trucks to the Food Forward warehouse in Gauteng and within a day the bulk food was loaded and transported to Port Elizabeth.”

In another instance, Isuzu made a refrigerated truck available to Gift of the Givers in the Garden Route, where the Knysna municipality faced an ecological challenge. Carp fish, an invasive fish species, continued to reproduce while the demand for fishing had declined during lockdown. However, in other parts of the Southern Cape and Karoo, many residents were faced with hunger. Gift of the Givers helped the Knysna municipality distribute the fish to thousands of starving communities.

This article was paid for by Isuzu.