From cleaner to car dealership owner 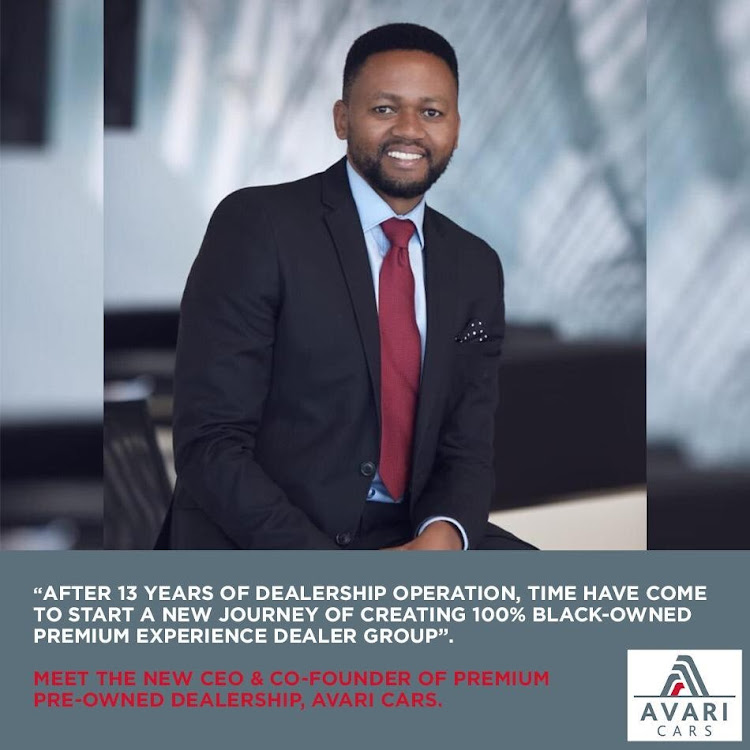 CREATING OPPORTUNITIES: Thembinkosi Pantsi is venturing into business with his 100% black-owned Avari Cars which he hopes will disrupt the car dealership industry
Image: SUPPLIED

An Eastern Cape-born businessman who has worked his way up from being a cleaner wants to disrupt the car dealership industry with his new business, Avari Cars.

Thembinkosi Pantsi, 39, of Makhanda quit his job at a top car dealership so that he could start Avari Cars — a 100% black-owned dealership based in Pretoria.

He said it took him five years to get the R20m he needed to start his own pre-owned car dealership as he struggled to raise capital or get investors.

Pantsi, who had to drop out after a year of studying towards a mechanical engineering qualification in Port Elizabeth because his parents who were farm workers could not afford the fees, had to work as a cleaner at a restaurant in Knysna and work his way up the ladder.

“I started there as a cleaner, cleaning toilets and doing dishes,” he said, adding he went on to be a barman assistant, then a barman and a waiter, before leaving the hospitality industry to take up a broker-consultant position at Liberty Life in George for three years.

“That is where I learnt all about business,” he said.

He is opening his business as many businesses have been forced to close shop because of the Covid-19 pandemic that has brought the economy to the brink.

Why take the risk?

“It’s been a dream of many years to have my own dealership.

“I always see the industry that has an opportunity that black people can get in and make an impact despite whatever challenges one faces.

“The reason we decided to start this business after this pandemic is that people still need cars.

“Also, in my experience with the motor industry, you need to get in when things are not looking great, so that when things start to pick up, you are already in,” he said.

“You come in with the right structure, the right business model and lean in terms of overheads and with the structure already there.

“You don't have to build anything; that is one of the reasons we are getting in now.”

Having taken the risk of going into business, Pantsi believes the world is his oyster.

“The ultimate plan is to have a dealer group, which means having a lot of these businesses and dealerships throughout the country and also franchises — that’s the route I’m going.

“We have bigger goals and bigger ambitions so that we can compete with the big guns, and it can be done.

“But sometimes we like limiting ourselves as black people and think we can’t do it on our own — and we can — hence we opted to be 100% black-owned to show people that if we put our focus at what we are good at the sky is the limit.

“Second, it’s to start breaking the narrative that for black businesses to succeed they need to partner with white companies — that’s not true.

“We just need to put in the hard work, dedication and focus, and everything is possible,” he said.

He said once renovations to the dealership were completed, they would employ at least 12 people.

“They are already lined up and ready to start when we have our grand opening on November 19,” he said.

While he encouraged people to get into business, he stressed the importance of people not starting an enterprise just for the sake of it.

Aspirant business owners should also not think they will turn their businesses into empires overnight.

People should only start businesses based around something they were passionate about, he said.

“Without passion it becomes a painful journey and exercise, because you are doing something you don’t have passion for.

“As much as I want to have businesses, I am not a construction guy and won’t go into construction.

“We also need to have patience as business people because we always want to make a profit on the first day of opening.

“We want things to happen now,” he said.

“We look at this and that person, and see the cars they drive and the neighbourhood they live in, but you don’t know that person's journey.

“You need to focus on your own journey and stop comparing yourself to others.

“There’s not one quick fix in business.”

Pantsi, whose parents still live in Makhanda, said he hoped they were proud of him.

“I have done my part, I will continue doing my part and inspiring others, because it’s no longer about me now.

“It’s about paving the way for others and creating opportunities for others.”