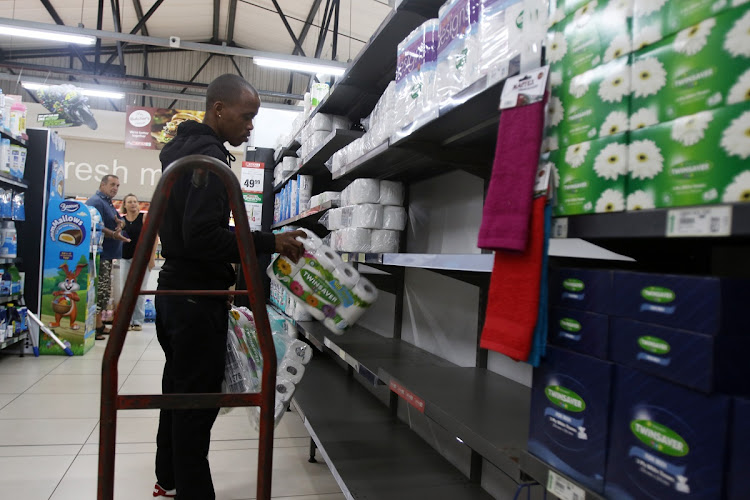 A store worker refills the shelves at a Spar outlet. Rhodes Food Group says its SA facilities have not been affected by the coronavirus, and most have the capacity to increase production at short notice.
Image: DAILY DISPATCH/ MICHAEL PINYANA

Rhodes Food Group, which makes Bull Brand corned meat and Bisto gravies, said it has seen a spike in canned goods demand in SA in March due to the coronavirus outbreak.

While it is still too early to determine consumer buying patterns during this period of social isolation, households are stocking up on long-life products such as canned meat and vegetables, as well as baby food, the group said.

Rhodes Food Group said its SA facilities had not been affected by the virus, and most had the capacity to increase production at short notice.

“The production facilities are supported by a robust supply chain and the group now has sufficient raw material stock cover for nine to 12 weeks on imported materials should the international supply chains be disrupted,” the group said in a trading update.

The virus outbreak is weighing on the group’s exports of canned fruit to China, resulting in an 11.3% fall in international volumes since January.

While some of the excess volume of canned fruit earmarked for China was exported to other Asian markets, a significant volume will be placed in alternative markets at lower margins than those typically achieved in China, the group said in a trading update for the five months to end-February.

The effect on margins should be partially offset by a weaker currency.

Regional fresh foods turnover increased 15.9%, with the performance driven by the strong growth in the ready-meals and pie categories.

In morning trade on Monday, Rhodes Food Group’s share price was little changed at R11.98, having lost about a fifth of its value so far in 2020. Over the same period, the JSE all-share has fallen 33%.