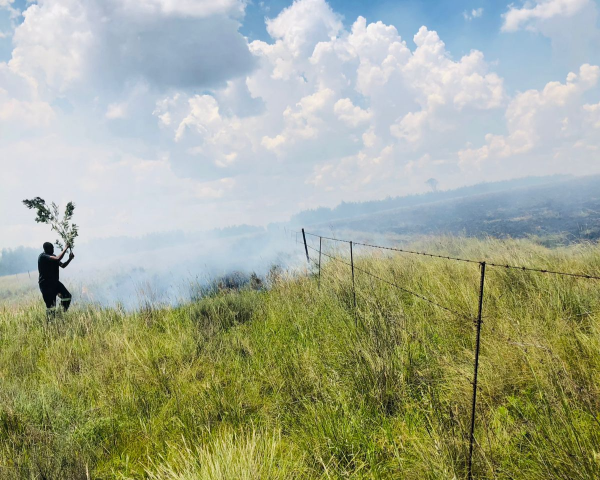 A farm worker uses a branch to beat a fire suspected to have been started by an arsonist on Saturday night.
Image: Kenilwe Raphesu

An emerging farmer has lost 50ha of cattle feed after a fire was allegedly started on her land in the North West.

Kenilwe Raphesu, 24, who won the RPO/Nerpo Emerging Farmer of the Year trophy last year, said the fire started at about 10pm on Saturday and was only extinguished on Sunday. 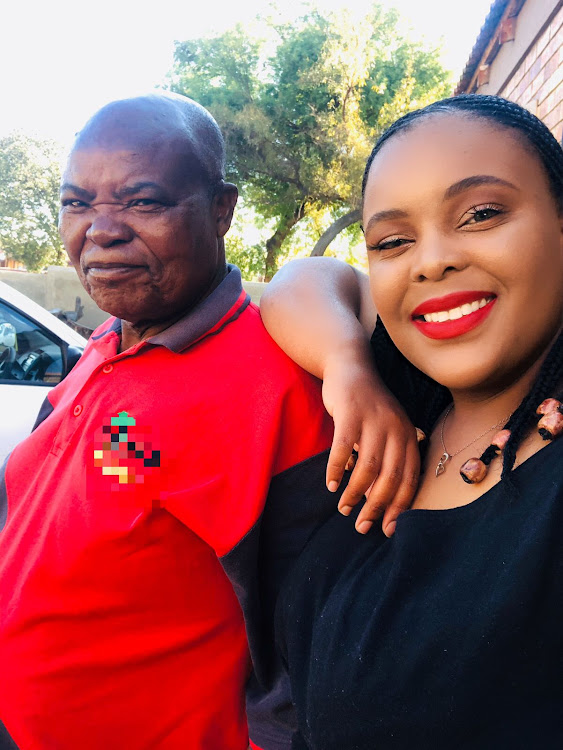 She has concerns it may have been started intentionally.

“The fire looks intentional. It was started in the middle of the field where the grass and the ground were still wet from rains. There was no lightning at the time and it couldn't have been from a cigarette. Someone entered the farm and started it. We think an accelerant was used because the grass was so wet and there seemed to be no direction to the fire,” she said.

Last year Raphesu said a massive fire started at the highway and moved into the farm and to a neighbouring farm.

“It happened during the day and the grass was dry. That was a wild fire.”

Fortunately, this weekend’s fire did not spread to neighbouring properties.

“The person who started the fire could know us. They went to the exact field we had planted three months before," she alleged. "We were going to harvest the hay in February.”

The Smutsfinger grass which was destroyed was planted for the livestock which are raised and sold off the farm. The 405ha farm has 62 pigs and 54 cows. The Smutsfinger would be mixed with yellow maize — also grown on the farm — molasses and salt to feed the cattle.

“It is a great loss. We bought the seeds and fertiliser. We would have had enough to feed the animals for the year but now we need to buy feed which is very expensive.

She said she had bought R6,000 in seed for five plots, meaning her losses total R30,000, excluding the cost of the fertiliser.

“The animals are safe. They were kept in a different area.

“We are concerned because we don’t know the intention [for the fire]. We’ve suffered a lot of loss in terms of livestock in the past. We previously lost almost a whole kraal due to theft. We’ve had people come in and slaughter and take just the cuts of meat they are interested in. I’m worried about safety of the animals.”

Raphesu, who is studying labour relations and psychology at North West University, uses social media to raise awareness about farming by sharing images and information on what she is doing to maintain her farm.

She took over the farm from her father Dr Mamabolo Raphesu, 74, who has retired.

Dr Raphesu acquired the land in 2007 from the then department of land affairs as part of its implementation of the Proactive Land Acquisition Strategy (Plas).

“I am following in my dad’s footsteps. I took over the farm as director in 2019.

“My dad is devastated by the fire. Last year’s fire was unlike this one. We thought it would go out because it was raining but on Sunday morning we realised it was still going. It took my father, my uncle, an employee, the neighbour and I hours to extinguish it.”

Police from the Barrage Station in Vanderbijlpark are investigating the alleged arson.