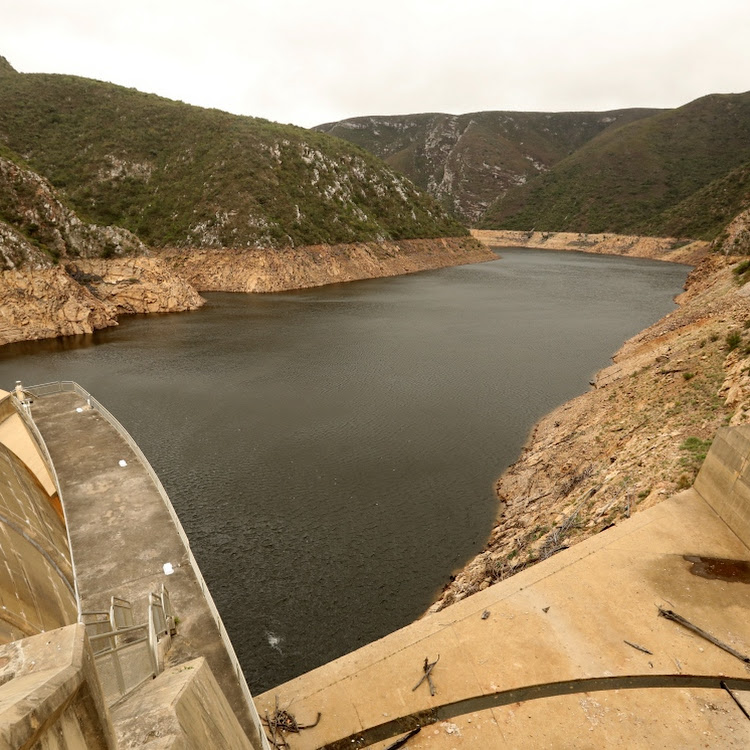 PERILOUSLY LOW: The Kouga Dam, which on Sunday stood at 4.94% of capacity, only just above the 3.1% point where no further extraction will be possible
Image: FREDLIN ADRIAAN

There is no proof that illegal farm dams are reducing flow into the Kouga Dam and hard-pressed farmers in the area need support rather than unjustified criticism.

This is according to Agri EC, which said claims that farmers were contributing to the problem were unsubstantiated, unfair and damaging.

It said the focus should rather be on water-sapping alien invasive vegetation, leaks and six years of drought which had resulted in minimal run-off over the parched ground.

McNamara said the department had, at the latest monthly Algoa monitoring meeting on August 11, said that it was still in the process of verifying and validating the dams in the Langkloof area.

“They said they would have a representative in the area only this week, August 16 to 20, conducting inspections and finalising the process.

“It was stated further that this process for the dams within the Langkloof/Patensie area will only possibly be complete in September 2021.”

He said the department’s verification and validation process had been under way since 2013.

“It is the responsibility of the department to complete this process timeously and provide accurate results.

“The 17 dams referred to in the latest The Herald report [published on Friday] are ‘considered to be illegal’ but have not been verified if illegal or not.”

Agri EC acting natural resource manager Megan Maritz said all farm dams had to be licensed and verified but for those above 2,000 cubic metres the requirements were more onerous and various authorisations, including for an environmental impact assessment, needed to be issued.

Langkloof Farmers’ Association natural resources manager Johan Kotze said on Sunday he did not agree with illegal dams but the real effect of these possibly unlawful structures on levels of the Kouga Dam needed to considered.

“There needs to be perspective.”

He said the Langkloof had not had proper rain since 2015.

“We are struggling to make ends meet.”

The Kouga River originates near Uniondale, flowing eastward to feed the Kouga Dam, which on Sunday stood at 4.94% of capacity, only just above the 3.1% point where no further extraction will be possible.

The dam feeds farmers in the Gamtoos Valley, as well as the towns of Hankey, Patensie, Loerie and Thornhill, all in Kouga Municipality.

It also feeds the Kariega township of KwaNobuhle in Nelson Mandela Bay.

The metro expects that KwaNobuhle will be the first area in the Bay to run dry and is preparing to roll out water tanks across the large township.

“The western parts of the Eastern Cape have been experiencing a serve drought for several years.

“The latest August 2021 rainfall statistics clearly show that there has been absolutely minimal rainfall within the catchment area of the Kouga System.

“Any water available on the surface of the earth will seep into the ground before it reaches the dams.

“Once the soil is saturated and the water table has lifted, water should then flow off the surface in the form of runoff.

“It is self-explanatory that minimal rainfall in the catchment will result in minimal in flow into the Kouga Dam.”

He said the department had over five years ago imposed tough water restrictions on Kouga farmers.

“This means that farmers only have a 20% water allocation which they can use for agricultural purposes.

“Alien and invasive vegetation, along with other contributing factors such as leaks and other faults result in great losses within the system.

“Farmers are already under extreme pressure due to the drought and the restrictions imposed.”

He said reporting of figures for possibly illegal dams before the verification process was complete could be severely damaging.

“It is going to cause unnecessary, irrational victimisation of farmers who are the core producers driving the Eastern Cape economy.

“That is especially in the Patensie and Langkloof area, where export-quality goods are produced, which is one of the main boosters of the Eastern Cape economy.

“These farmers should be protected rather than scrutinised as they are the people who ensure food security within SA.”