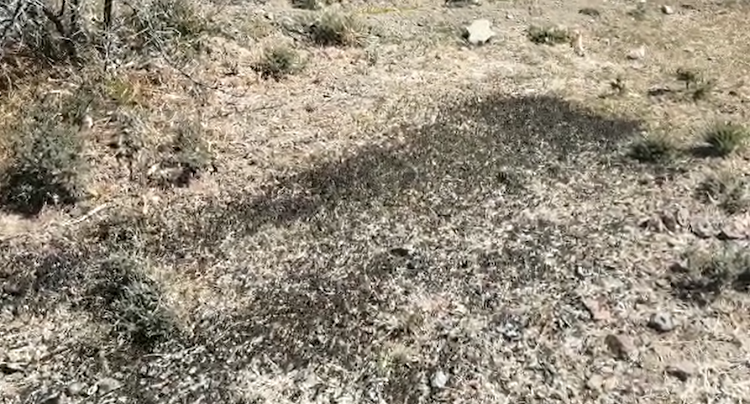 If the brown locusts hatch in the Sarah Baartman and Chris Hani districts, the pests will swiftly fly eastward, clearing out any cereal crops in their path.

This is according to Agri EC chair Doug Stern, after the revelation that a brown locust outbreak has hit the drought-ravaged districts, affecting about 127 farms.

“There is a hell of a lot of them. It is a big problem,” Stern said.

However, he said there was a positive to the outbreak.

“After such an outbreak some good rain usually follows and we could then be heading for a good season next year,” he said.

If they get to the flying stage, they will eat up any grazing and cereals they come across.

According to departmental entomologist Nolitha Skenjana, the locusts, which feast on grasses and cereals, often causing widespread devastation, are now considered to be at stage 1 of their development, with some moving into stage 2.

This was confirmed by Stern, who said the pests had hatched but were not properly hopping at this stage.

“If they get to the flying stage, they will eat up any grazing and cereals they come across.”

It is predicted that the locusts will reach the flying stage in about 18 days.

The agriculture department was quick to act, putting systems in place to successfully manage the pests as state entomologists had been aware of the outbreak since March.

Spraying with knapsacks and bakkie pump sprayers has already started and farmers are being trained,  as guided by the Locust Policy of SA (1998).

The eggs can stay dormant for up to 10 years, according to Stern, who said they only hatched when conditions were conducive.

“Such an outbreak is nature’s way of cleaning up with fresh growth.

“We could be in for some good summer rain.”

He said the situation was under control for now.

“But it is creating a lot of worry for many farmers.

“This all adds to the woes of farmers who are still grappling with a severe drought.”

Stern said the government was tackling the locust outbreak head-on, applauding the effort made by the department.

Graaff-Reinet farmer Peet van Heerden, who farms sheep, goats, cattle and lucerne, said parts of the veld on his farm looked like a river with the number of locusts scattered about.

“There are heaps and heaps of them, going at least 500mm deep,” he said.

He said once the locusts started to fly, the situation would become far worse.

“They then start to lay eggs again.

“At the moment, they are small and it looks like black rivers flowing through the veld.”

He said a swarm of locusts could clear through 7,000 tons of dry matter within a day.

“That is about as heavy as 14 planes.

Van Heerden said it was not all bad though.

“You can see the locusts in a positive light as they cut back the vegetation and give back in terms of fertiliser.”

However, he said if the locusts reached irrigated crops, they caused devastation.

“They can clear a 5ha mielie field in just one morning.”

He urged farmers to use the pesticide, Sumi-Alpha UL, which the government was providing.

“Many farmers are hesitant but it is safe and works well.”

He said the thousands of wattled starlings that had gathered on his farm remained unharmed from the pesticide.

“The government has been really good when called to assist.

“They come quickly and spray.”

Ina Botha, who has a farm between Middelburg and Graaff-Reinet, said the locusts once grown would destroy everything in sight.

“They just eat and eat.

“If you don’t destroy them every day, there will just be more tomorrow.”

She said it was a tough time for farmers having to still deal with the drought.

“The problems never seem to end.”