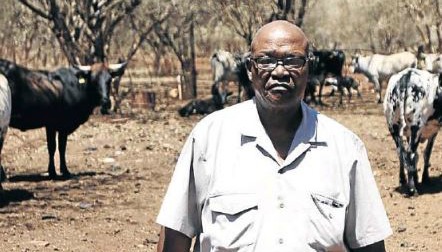 David Rakgase has been farming on Nooitgedacht farm for the past 27 years.
Image: Antonio Muchave

The Limpopo farmer who has been at loggerheads with the government for almost 20 years over the ownership of the Nooitgedacht farm says he is excited to have finally bought it.

David Rakgase, 79, has been farming on the leased land for the past 28 years but was taken from pillar to post while attempting to buy it for his family.

He had initially leased the farm from the then Bophuthatswana government. In 2003, the department of agriculture approved his application to purchase the farm through the then Land Redistribution for Agricultural Development Programme (LRAD).

Last year, the Pretoria high court ruled that the government’s inability to sell him the farm was unconstitutional and compelled the department of agriculture to hand ownership to him at the price they initially agreed on.

“I’m still to finalise the paperwork, but it was confirmed that I now own the land. I’m so happy and look forward to farming without fear. My family and I have dreamt of this for so long, I’m glad we didn’t give up,” Rakgase said.

He regrets that he had to fight for so long with the government to reach a deal.

Through the LRAD he was loaned 50 Nguni cattle that he used for breeding. At the time of his founding affidavit, the herd had increased to 147 cattle (the total number of livestock on the farm was 500 cattle, 30 pigs, 80 sheep and 130 goats).

The DA has expressed satisfaction that Rakgase finally owns his farm after an 18-year battle to honour the earlier agreement.

After the high court ruled in favour of Rakgase in September 2019, the sales agreement has finally been signed for the original offer of R621,000.

“Insofar as there are other farmers with similar stories to David Rakgase, the DA will not hesitate to assist these farmers.

“If the ANC government were serious about land reform and empowerment, this was a simple case to resolve, and empower a successful farmer. But instead of fully supporting Mr Rakgase and honouring the sales agreement, the department did everything in its power to make sure that the land in question was not sold to Mr Rakgase at the price agreed,” Steyn said.