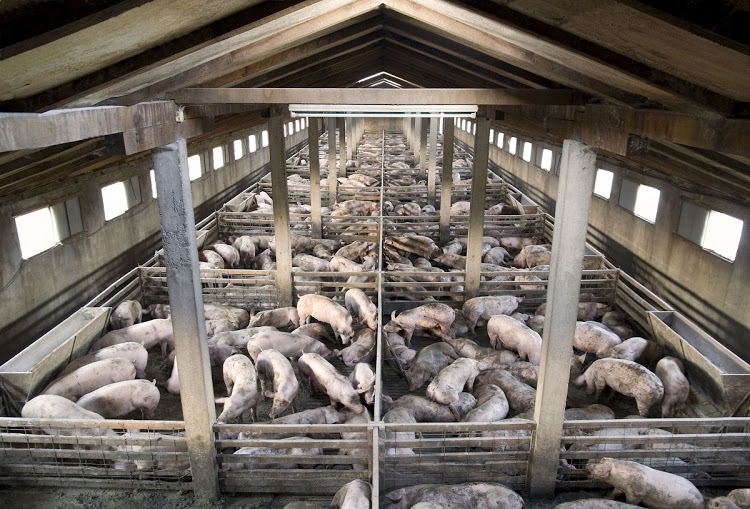 African swine fever has erupted in a rural area near Butterworth
Image: 123RF

More than 200 pigs have died in the Amathole area since the outbreak of African swine fever a month ago, the agriculture department said on Wednesday.

The director of animal health at the department, Dr Mpho Maja, said the pigs that had died were among about 50,000 pigs belonging to the residents of five different villages in the rural area outside Butterworth.

“It is not clear how many pigs are infected but normally 95% of the animals that contract the virus, die.

“As of Monday the deaths stood at 200 since mid-April but it is likely that figure has increased over the past few days.”

Pretoria-based Maja said pigs could become infected with the virus by sniffing an infected animal or by eating a piece of infected meat.

The authority was still investigating the outbreak but the most likely scenario was that it had been introduced to the area via pig feed.

While African swine fever did not make people sick it could affect the taste of the pork from a slaughtered pig, she said.

She said the authorities would not be culling any of the stock as the disease had become endemic and this was no longer an effective remedy.

“There is also no vaccine but there are several preventive measures pig farmers can take and we are working together with the pig farming industry to create an awareness campaign around these measures.”

The most practical way farmers or pig-owning households could prevent African swine fever infecting their animals was to improve their “biosecurity”, she said.

“That means try to keep your pigs contained as much as possible. A roaming pig might meet another roaming pig that’s infected.”

People should also be careful when buying a pig, she said.

“Often a pig might be offered for sale because the owner quickly wants to get rid of it because it’s sick.

“So our advice is try to check the health of the animal you buy and ideally get a health certificate from a vet that will allow you to take the seller to the consumer commission at some point if necessary.”

South African Pork Producers Organisation CEO Johann Kotze said African swine fever spread relatively slowly but was driven by human activity which might also include a farmer tramping from an infected pen to a clean pen.

“It is a lazy virus. It cannot make people sick but it threatens our supply of protein. That is why we worry about it.”

The virus would not likely affect the price of pork, he said.

“If it was spreading like wildfire through commercial farms then perhaps it might have an affect but not otherwise.”

He said there was no clear figure for the number of small scale pig farmers or household pig keepers but there were about 165 commercial pig farmers in SA with about 115,000 sows.

In the commercial sector, good preventive mechanisms geared around locking down the particular farm involved were in place to counter the virus, he said.

“In small scale farming areas with free roaming pigs it is not so easy to manage.

“Each household in a village might have two to five pigs. There are plenty of these households and small scale farmers in the Eastern Cape so it is a difficult area for us.”

Agri SA spokesperson Thea Liebenberg said the organisation and its affiliates Agri Eastern Cape and the South African Pork Producers Organisation were working with the government to develop an awareness campaign to help stem the outbreak.

She emphasised that the African swine fever did not affect humans.

“The consumption of pork is safe. However, any meat or other products from infected pigs can be a source of infection for other pigs,” she said.